Growing up in Toronto in the 1980s there were a number of kids my age abducted and killed. Leslie Mahaffy, Alison Parrott, Kristin French, Sharin' Morningstar Keenan are just a few of the girls whose tragic ends were embedded in my mind as a cautionary tale against stranger danger. In those days, we kids would play outside in laneways and parks until the streetlights came on, we were all too aware of the looming threat of creepy strangers. 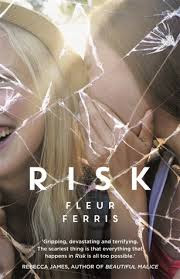 Today there are still a lot of creeps, but they lurk in different shadows, behind proxy servers, pseudonyms and online identities. They troll the internet and engage in predatory grooming of unsuspecting young people who are just looking for friendship, love or adventure.

Fleur Ferris'debut young adult novel Risk (2015) centres on two fifteen year old girls who have been best friends since birth. Sierra is gregarious, full of life and always up for excitement. Taylor is more reserved, living with her mum after her dad's passing a few years earlier. Both are navagating the awkward teenage years of high school, first loves, parents and friendships.

Sierra has been grounded and is not allowed to use the Internet. So one day at Taylor's, Sierra strikes up an online chat with a man named Jacob Jones. He says he is only a year or two older, goes to a local school and has a lot in common with her. Jacob sends Sierra a photo; she swoons and makes plans to meet him on Friday after school. When Sierra doesn't return from her date, Taylor gets plunged into the world of online predators.

RIsk is an interesting novel. Admittedly I am not the target audience for this book, but I really enjoyed it. The novel could have been preachy and dull, instead it gave a solid message to young people about online safety. The characters felt real and believable. The story keeps momentum and comes to a satisfying conclusion.

Ferris herself has an interesting backstory. Before turning to writing she was a police officer and a paramedic. She is acutely aware of the dangers young people can face and the need to talk openly with children about cyber safety.  I would recommend this book, especially to parents and young people.
Posted by Ina Guddle at 07:17
Newer Post Older Post Home