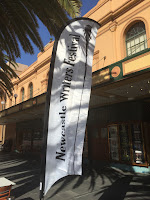 Last weekend I travelled to Newcastle to attend a couple of sessions at its annual writer's festival on a whim. I had only heard about the festival a few days earlier, but quickly booked into two sessions on the last day of the event and organised my travel. It was an early start, leaving home shortly after 5am to catch the train north in order to get to Newcastle before 10am. The Festival was held in the beautiful Civic Theatre.

The Independent: Tony Windsor in conversation with David Marr
Our first session was with former MP Tony Windsor. Apparently the original session was to be Sarah Ferguson talking about her book The Killing Season Uncut - based on her series about the Rudd/Gillard years. The book is not yet published so she didn't appear, but Ferguson is scheduled for the Sydney Writer's Festival in May and will come back to Newcastle for a standalone event.

Tony Windsor was an excellent choice for her replacement. He is warm, personable, intelligent, honest and passionate. Plus, he has just announced his intention to run for office again against Deputy PM Barnaby Joyce. David Marr is always delightful as he probes and ponders and keeps the momentum going in the conversation.

They spoke about Windsor's book, Windsor's Way, based on his time in the hung Australian parliament. Marr half-jokingly referred to the book as Windsor's re-election manifesto.

Windsor shared tales of the negotiations for the balance of power and the difference between Gillard and Abbott's approach. Integrity, honour and commitment are clearly important to Windsor. Abbott wanted to be Prime Minister and would do anything for it. Windsor felt that any commitments Abbott gave were untrue. Gillard, on the other hand, spoke about what she wanted to do for Australia. She was interested in policy not position. Ultimately, Tony Windsor and Rob Oakshot felt Gillard was more trustworthy, with clear policies, and so handed her the hung parliament.

On Gillard, Windsor said he had immense personal regard for her. She has a strong intellect and can get across issues quickly. He recounted how she would face all sorts of pressure from the media and the opposition and was working in a really toxic environment, but then would sit down with him and have a cup of tea. He never felt like she was disinterested or didn't have time.

The reason for returning to politics is because he cannot sit by and watch what is happening in Canberra. He wants to stand up for Gonski reforms, the original NBN, water rights, climate change and regional issues. As a farmer, he is passionate about environmental and connectivity issues.

The hour with Windsor and Marr went too quickly. I would have liked to have heard more from both of them. But I will watch the upcoming election with interest and wish Windsor well in his attempts to regain his seat.


Reality Bites: Fiction writers inspired by real life
The next session was a panel discussion about how real life inspires and informs fiction writing. Angela Savage, crime writer, chaired the panel and asked insightful questions of the guests.

Rod Jones spoke about how his family inspired his latest book The Mothers.  The story focuses on three generations of women in working class Melbourne. Alma falls pregnant during WWI and her daughter is born in secret and given up for adoption. In 1952 Anna goes to a Salvation Army home for unmarried mothers when she has her baby. In 1975 Cathy and David are unmarried and expecting a child.

Each generation of the story was inspired by Jones' life and the history of adoptions, hardships and the institutionalisation of young women that shadows Australia. Jones said that he used 'autobiographical writing to explore the dark corners of myself'. He spoke of the difficulty in exploring these dark corners and the challenge of pulling the novel together. He said he had no qualms about drawing on real life in his family, and that while there are facts within this novel it remains fiction.

Fleur Ferris is a former police officer and paramedic. She has written a young adult novel Risk which focus on two fifteen year olds that meet a man online with disastrous consequences. A mother to three daughters, Ferris was inspired to write this because of her background and real events she had heard about. For example, she knew of a teenager that was a good kid, not looking for trouble, but trouble found her when she began sharing photos to a man she met online. Ferris wrote this book to speak about internet dangers and now spends time speaking to school groups about internet dangers.

Charlotte Wood spoke about her book The Natural Way of Things which was inspired by the Hay Institution, where young women were incarcerated and subjected to sadistic brutality. She said she started writing a historical book, but when she heard of the woman in the Army who was punished for speaking out about rape - the so called Skype Slut - she realised that this was a contemporary tale.  Wood said she writes fiction to process how she feels about things. She also said she did not feel that she could write a historical fiction set in the Hay Institute because many of the women there have gone on to write their own accounts and she did not want to take away their story when they already had so much taken from them.

Jaye Ford is a crime writer and her latest psychological thriller is Darkest Place. She was inspired to write this because she had a 'creepy thought' about what it would be like to feel like there is a stranger in your house but be unable to prove it. She then came across a newspaper article about a man who had broken into a number of homes to watch women while they slept. Her creepy thought expanded and became the novel. In the book Carly Townsend has moved into a new apartment in Newcastle and wakes to find a man standing over her. The police search the home and find nothing. When it happens again, the police begin to doubt her and think she is seeking attention.


The panel spoke about the importance of character, the ethics of writing from real life and the challenges of fictionalising real events. It was an interesting session and I am glad I attended, although it was sad that there were so few people in the audience. Of the panelists, I had only known of Charlotte Wood, so it was wonderful to be introduced to new Australian authors.


After the session I purchased a copy of Fleur Ferris' Risk and a copy of Charlotte Wood's earlier novel Animal People, and got these signed by the authors. I started reading Risk on the train ride home and will blog about that shortly.

It was a lovely day and, after a pub lunch in a micro-brewery, we had a quiet afternoon strolling Newcastle's sunny streets and beaches.

The Newcastle Writers Festival is a much smaller event than the Sydney Festival and has a different vibe. I was saddened to see such low attendance at a the event and the Twitter backchannel was not very active. While I only saw a small snapshot of the Festival, I would definitely come back to Newcastle for future festivals and would encourage greater attendance at this literary event.