The beautiful cover of Charlotte Wood's incredible novel The Natural Way of Things (2015) makes a number of promises, by way of quotes from leading Australian authors. Malcolm Knox calls it 'brave and brilliant', Clementine Ford claims it is 'utterly unforgettable', Joan London and Tegan Bennett Daylight point out its uniqueness. But Christos Tsiolkas describes it best when he writes "You can't shake off this novel; it gets under your skin, fills your lungs, breaks your heart."

That was certainly my reaction to the novel. As I read I felt the need to talk to friends about it and share this experience, a feeling I have not had with such intensity since reading We Need To Talk About Kevin many years ago. This is a book that needs to be reflected on, spoken about and shared. 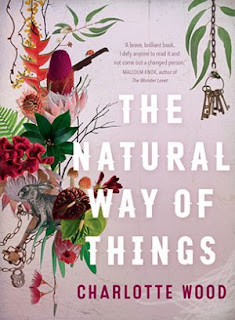 The story begins when two women wake from a drug induced sleep to find that they have been imprisoned in a ramshackle property in the Australian outback, surrounded by an electrified fence. They find they are not alone, but rather among ten women who have their heads shaved, are dressed in scratchy tunics and oversized bonnets, and are forced to perform hard labour while chained together in the merciless sun. As the days progress the women realise what they have a common - each one has been involved in a sexual scandal.

The scandals that brought the women here are all too recognisable: Verla had an affair with a high-profile politician; Hetty with a Cardinal; Lydia partied too hard on a cruise-ship; Rhiannon was a gamer girl, a 'Codebabe'; Leandra was in the army; footballer's girlfriend Yolanda was gang-raped. Whether it was the school principal's head girl, the reality show contestant, or the flight attendant, all of these women have been unchaste, have sinned, and are now being punished for their sexuality.

The property is run by Hardings International, under the ironic banner "Dignity and Respect in a Safe and Secure Environment", with three vicious, baton-wielding employees to keep the girls in line. The threat of sexual and physical violence is pervasive, as the jailers aim to humiliate and strip these women of their humanity. While this sounds desperately bleak, The Natural Way of Things is actually a gripping, provocative, page-turner which, as Tsoiolkas claims, 'gets under your skin, fills your lungs and breaks your heart'.

Wood is a gifted writer, not just in her ability to tell a good yarn, but in the beauty of her prose. She creates the bleak, dry landscape and gives rhythm to the day's events by her crisp writing. Some of the many lines which captivated me are:


"A flock of white cockatoos arrived, landing noisily down on the flat, the white line of them billowing and settling like a thrown bedsheet." (page 199)

"The tin walls are heating up already, blowflies dotting against them, their arrhythmic drones making it feel even hotter than it is." (page 54)

The Natural Way of Things has been compared to Margaret Atwood's The Handmaid's Tale, with good reason. Both are speculative fiction which are all too possible. Slut-shaming and misogyny are such common occurrences that it is not a hard to imagine such an outback prison for wayward women. Indeed Wood was inspired by the Hay Institution for Girls, a maximum security home for girls which operated in the 1960s and early 1970, where 14-18 year olds were isolated and subjected to daily humiliations, hard labour and abuse. We have a shameful history (and present) here of locking people up - whether in outback institutions or off-shore detention centres - so this facility is no stretch of the imagination.


"What would people in their old lives be saying about these girls?.... Would it be said they were abandoned or taken, the way people said a girl was attacked, a woman was raped, this femaleness always at the centre, as if womanhood itself were the cause of these things? As if the girls somehow, through the natural way of things, did it to themselves." (page 176)

Of course Wood was also influenced by the almost daily news of women who were 'asking for it', 'playing the gender card', 'dressed like that', 'should have known better', 'could have left him' - a pervasive narrative. Her anger at gender inequality and contemporary misogyny is well founded and well articulated, but this is not a ragey/ranty book. Rather it is timely and necessary. This is a novel which needs to be read, discussed, debated.

I had the pleasure of meeting Charlotte Wood and hearing her speak at the All About Women festival in Sydney a few weeks ago. This novel has been shortlisted for the 2016 Stella Prize.
Posted by Ina Guddle at 08:42
Newer Post Older Post Home