Prolific writer Alexander McCall Smith is in Sydney to promote his latest book, Chance Developments (2015). As I never miss an opportunity to hear him speak, I attended an event at the Seymour Centre as part of the Sydney Writers Festival. Over the course of an hour, McCall Smith spoke on a range of topics, delighting the audience with wonderfully humourous stories. 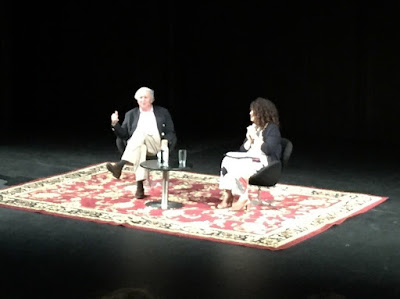 The author began by talking about hipsters with their tailored trousers, bicycles and beards. He pondered the difference between hipsters of today and the beat generation in the times of Kerouac. Somehow we segued into talking about photography, a passion of McCall Smith, and his Chance Developments.

McCall Smith wrote Chance Developments as a series of unexpected love stories. He came across several old black and white photographs and, not knowing the real story of the couples in the pictures, he wrote a fictionalised account of each couple's romance. The tales are set in far flung places: a circus in Canada, a goldmining town in Australia, a country village in Ireland, the Scottish highlands, and McCall Smith's beloved hometown of Edinburgh.

He talked at length about different kinds of love - reminding me of the scene in The English Patient where Katherine Clifton tells Almasy that "romantic love, platonic love, filial love - quite different things surely."

For McCall Smith love is central and takes many forms. He believes that one of the most heartbreaking kinds of love is that which is unspoken. His novel The Forever Girl is about unrequited love, in which a young girl falls in love with a boy and then spends much of her life following him around in the hopes that he will notice her. At the event McCall Smith spoke of the anguish of not being able to reveal your love for someone else.

The conversation then shifted to friendship. McCall Smith came to prominence with his bestselling series The No 1 Ladies Detective Agency which centres on the friendship of Mme Precious Ramotswe and Mme Grace Makutsi. The author has always been interested in the nature of friendship - how some people form a bond that cannot be broken, how others cull their friends on a regular basis, and how some friendships can withstand great distances.

McCall Smith greatly admires the writings of Patrick O'Brian and the relationship between Aubrey and Maturin which he believes is one of the best explorations of male friendship. McCall Smith writes many children's books and his School Ship Tobermory series is a tribute to O'Brian's series. He spoke about the differences between male and female friendships, and how he envies women for their ability to talk openly about things. He finds it relatively easy to write from a female perspective.

Of course he is always writing something and generally had three or four books on the go. He spoke about how he is currently working on the next instalment of the Scotland Street series and regaled the audience with some tidbits of where the story is heading. He is also working on the next Mme Ramotswe book and another Bertie novel. He tends to get up at 3 or 4am and write for a couple of hours before going back to bed and rising to write again. He cannot write all day but has found a workable routine. He has a full time assistant who aides him with his correspondence and appointments.

I really must get back into reading his books. I began with the Detective series many years ago and read the first three or four back-to-back. But then I took a break and now I am not even sure how far behind I am! The Scotland Street series is great too although I am not caught up with that either. I have never read any of the Sunday Philosopher Club (Isabel Dalhousie) novels. Hearing McCall Smith speak reminded me of what an excellent story teller he is, and has encouraged me to get back into his books again.