Even before the Sydney Writers' Festival (SWF) program was released, I was planning my week. On International Women's Day on 8 March 2016, SWF announced that Gloria Steinem would be headlining the event. I immediately bought tickets, which was a good thing as her session sold out, as did many of the others I am attending.

My festival companion is away, so I am largely flying solo this year. I have been left to my own devices and consequently may have booked in a few too many sessions! However, I will be spending much of Friday with a good friend and I have plenty of people I expect I will see at the festival.

Each morning of the festival the Sydney Morning Herald hosts an informal session at the Theatre Bar at the End of the Wharf with various authors stopping in to discuss current affairs. I decided to swing by and hear Aleksander Hemon and Madeline Gleeson. It was packed with early morning festival goers keen to hear discussions about the latest news. I didn't stay for too long (as I needed to join the queue for my next session) but during the time I was there discussion focussed on Minister Peter Dutton's xenophobic comments about illiterate refugees taking Australian jobs. Minister Dutton's remarks would come up time and again throughout the day as authors were horrified by his stance.

I had planned on going to a different session, one where historians Alan Atkinson, Carolyn Holbrook, Babette Smith and Caroline Butler-Bowden discuss how they choose their subjects.  However, at the last minute I joined a different queue and was delighted with my choice. Award winning journalist Quentin Dempster chaired the panel which featured investigative journalists Suzanne Smith, Caro-Meldrum-Hanna and Steve Pennells.

Suzanne Smith spoke about her long investigation into child sexual abuse in the Catholic Church, particularly in the Newcastle Maitland area. Whistleblower Peter Fox, the police officer who bravely spoke out about what was happening, was instrumental to Smith's story and was in the audience. Smith's investigation shone a spotlight on the issue, which lead to Prime Minister Gillard calling the Royal Commission into Child Sexual Abuse.

Caro Meldrum-Hanna has uncovered many stories, but most recently she conducted a lengthy investigation into the greyhound live-baiting scandal. She spoke about the lengths her team went to to uncover the horrific practices of live-baiting and abuse in the greyhound racing industry. During the talk Meldrum-Hanna also spoke about her work on the Health Services Union case where she investigated alleged corruption by Michael Lawlor and Cathy Jackson.

Steve Pennells is best known for his long-standing battle with mining magnate Gina Rinehart. Writing for the West Australian, Pennells questioned Rinehart's funding of (now deputy Prime Minister) Barnaby Joyce's campaign. Rinehart sued and Pennells battled in court for two and a half years to protect his sources.

This was a really interesting session as journalists uncovered their secret weapons: trusting sources; tenacity; curiosity; commitment and smarts. They talked about whistleblowers, defamation, major stories like the Panama Papers and more. A great hour of discussion to start my festival.

In this sold out session, Julian Burnside QC spoke with writers who have been threatened or persecuted for their work. It was a thrill to see Burnside, as I have tremendous admiration for his brilliant mind and consistent advocacy for refugees. He is a living legal legend.

Chinese intellectual Xu Zhiyuan has written 11 books and is a columnist for the Financial Times. He is the author of Paper Tiger: Inside the Real China (2016) about the transformation taking place inside China. Zuiyuan spoke about the complexities of modern China, his heroes (like Australian writer Simon Leys and writer Albert Camus), and the fear most Chinese people live in. The fear he described is internalised and has become 'the driving force of economic growth.'

Samanth Subramanian is a New Delhi-based journalist. He has written for the Guardian, New York Times, Wall Street Journal, Newsweek and other publications. His latest book, This Divided Island: Life Death and the Sri Lankan War (2015), explores the legacy of thirty years of war in Sri Lanka.

Subramanian spoke about his ten months in Sri Lanka and the so called 'white van abductions' where people were disappeared. He knows of journalists who had been white vanned and been returned to families with their legs broken. They were there lucky ones. He called on the State to be better protectors of journalists and to prosecute the abusers and harassers.

Indian author Deepti Kapoor has published her first novel, A Bad Character (2015) about a young woman in contemporary New Delhi torn between tradition and desire.  She spoke about the dangers many journalists in India face - the motorcycle drive by killings - and said that in some areas of India the danger is more profound. Kapoor said that journalists writing on certain topics  (illegal sand mining, collusion, caste system, Hindu religion) will make you a target.

Yeonmi Park is a human rights activist and a defector from North Korea. Her memoir In Order to Live (2015) recounts her escape from the brutal regime. She had an interesting story to tell about her life in North Korea, her escape, following the north star as she walked across the desert in Mongolia, and how her freedom has put her family in North Korea in danger.

After the panel discussion I was able to meet Anna Funder and she signed a copy of All That I Am  (2011) for me (read my review). I then ran into Peter Garett, who I am seeing tomorrow. We chatted for a but, took a selfie and he signed a copy of his memoir Big Blue Sky (2015). Such a lovely man.

This session with Walkley Award winning journalist George Megalogenis was sold out, and with good reason.

He spoke with Jamila Rivzi about his book, Australia's Second Chance (2015), which explores Australia's history of boom and bust and how the isolationist path we are on at the moment will not serve us well. While I have not read this book, I have recently read Megalogenis' Quarterly Essay which covers much of the same ground.

Megalogenis argues that there is 'a more interesting story to tell about the present by looking at the past'. He spoke about Australia's cycles of boom and bust and the links between immigration and prosperity.

He spoke about his own parents who came here after WW2 and referenced Duttons remarks. He talked about our culture of mateship and a fair go. 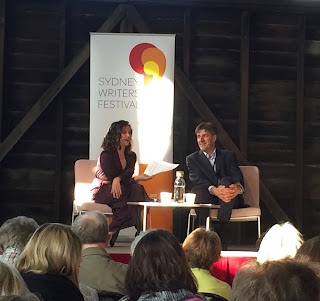 One thing that particularly resonated was when he spoke about the current political desire to capitalise on people's fears of new arrivals.  He said there is a paradox when people are concerned 'that new arrivals won't embrace Australian values when we cannot even articulate these values ourselves'.

I really enjoyed this session and must write up my blog entry on his Quarterly Essay.

The Danger of Ideas

I was really looking forward to this session as I wanted to see many people on this panel, chaired by Rebecca Huntley. The discussion focussed on censorship and freedom of speech.

Marie Darrieussecq is a French novelist and writer for Charlie Hebdo. I met her before the session and she signed a copy of Pig Tales (1997) for me. Marie spoke passionately about the chilling effect of the terror attacks in Paris. She explained her decision to work at Charlie Hebdo following the murder of so many staffers and the intense security regime. She spoke of fear and how it makes her look differently at people on the street, always bracing for the next wave of violence. I really feel for her and her family and I admire her courage.

Fellow Canadian/Australian Tara Moss is the author of numerous crime novels and some interesting non-fiction about women and feminism, including The Fictional Woman (2014). Moss is an eloquent speaker who talked about attempts to silence women through threats of violence. She cited the example of Anita Sarkesian who has been subject to abuse and threats for speaking out about sexism in the gaming world.

Tim Soutphommasane is the Australian Race Discrimination Commissioner. His latest book is I'm not racist but... 40 years of the Racial Discrimination Act (2015). I had not heard him speak before but he was thoroughly impressive. He spoke passionately about human rights and the need to challenge racism.When an audience member made some comments about Islam, he was quick to respond and clear about the need to embrace diversity.

The final member of the panel was Susie Orbach. I was most keen to hear Susie speak ever since I read her classic book,  Fat is a Feminist Issue (1978) some twenty years ago. She spoke about the origins of political correctness among other things. Orbach was delightful and after the session I met her at the book signing where she took a photo with me and signed my book.

Many subjects were discussed including trigger warnings ('this story may contain content distressing to some people'), the rise of far right parties in France and Austria, Trump, Germaine Greer and more. This was a brilliant session which left me feeling hopeful about the future as despite all the fear, violence and hatred in the world, there are strong voices speaking out and putting a contrary view.

Jeanette Winterson: The Gap of Time

After finishing my previous session I rushed from the wharves to the City Recital Hall to meet a friend for Jeanette Winterson.

I have long been a fan of Winterson's novels since I read Oranges are Not the Only Fruit (1985) in the early 1990s. I read many of her novels in those days, including Sexing the Cherry (1989) and Written on the Body (1992), then I took a break before reading Lighthousekeeping (2004) when it came out. I have been meaning to read her memoir Why be happy when you could be normal? (2011) as I reckon it would be a cracker as she has had an interesting life.

This session was phenomenal, almost theatrical. Winterson stood alone on stage and took us back in time to Shakespeare's era. She spoke of the Globe theatre and how the bard crafted his plays to appeal to the masses. Winterson spoke to why this play appealed to her and said 'in the writer's mind, autobiography and imagination collide'. 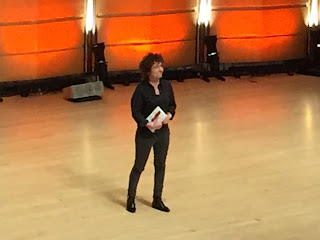 She then read from her book for about twenty minutes but this was no ordinary, dry reading.  Winterson acted out the work, complete with sound effects, bringing it to life.

After the session I met Winterson and she signed her memoir for me.

Well, that is day one done. I left the festival full of inspiration, excitement and a desire to read even more. It is hard to decide what the highlight is from day one as I truly enjoyed all the sessions. But if I had to decide, I would say Jeanette Winterson - she was truly wonderful.

Home late with just enough time to unpack all my signed books including:


I have an early start tomorrow as Friday is my biggest day at the Festival.