Conservative columnist Niki Savva has produced a wonderfully juicy, fly-on-the-wall account of the rise and fall of Prime Minister Tony Abbott. In The Road to Ruin (2016), Savva chronicles "how Tony Abbott and Peta Credlin destroyed their own government" much to the delight of political affairs junkies like me. 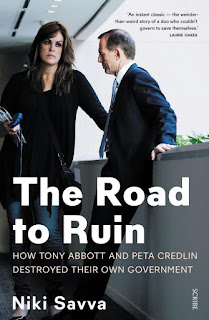 I should start by saying I am entirely biased - I did not like Tony Abbott or his politics. But I do care about government and parliamentary process, and I am deeply concerned about the impact of the revolving leadership in Australia on our economy, society and standing in the world. Abbott's two years as PM have left our nation worse off as he tried to turn us into a fearful, distrusting, unkind and xenophobic country.

So, with that said, this book about the government's implosion made me squeal with delight as Savva digs deep into Abbott's many failings.

By most accounts Abbott is a political fighter and was an effective Opposition leader. He plays dirty, divisive politics and was obsessed with taking out the top job. Once he got there however he could not transition into the role and become a true leader. Abbott is a wrecker, not a consensus builder. He is the king of three word slogans, not a man of ideas.

Perhaps his biggest failing was to appoint and then stand by his Chief of Staff, Peta Credlin. The co-dependent relationship between Abbott and Credlin is bizarre, to say the least.

Credlin comes across as a volatile bully - publicly ripping staff to shreds, leaking stories to the conservative press, and bursting into tears if she does not get her way. A gatekeeper and control freak, Credlin travelled everywhere with Abbott, sidelined Abbott's wife Margie, denied requests for access from Ministers and backbenchers, and even berated the PM that he would be nothing without her.

Abbott comes across as a weak and ineffective liar. He was repeatedly told by his closest allies that Credlin needed to go, that Joe Hockey should be removed as Treasurer, that more women (more than one!) should be appointed to Cabinet, that he needed to stop making captain's picks, and that he should use more temperate language. But Abbott only listened to Credlin and as such made far too many fatal mistakes.

And so, the onion-eating, shirt-fronting, winking, knights-and-damesing, boat-stopping PM bumbled along, surviving one leadership challenge in early 2015 until he was ousted in September 2015.

Savva has done her homework and has tapped into many strategically-placed named sources. She takes the reader inside the Cabinet meetings, staff rooms, and private sessions where the leadership spill was devised. Like a tightly-woven political thriller, we witness the disastrous handling of the Bronwyn Bishop 'Choppergate',  solve the mystery of the broken marble table, and the overthrow of the PM.

There has been much criticism of the fact that Savva did not seek commentary from Abbott or Credlin in response to the allegations raised in the book. While I honestly don't care what their side is, I do think they should have been given the right of reply.

I would have preferred that there was less Savva in the book. Undoubtedly Savva is a well connected Liberal, having worked for years for Peter Costello and John Howard, but her interjections into the book were an unnecessary distraction.

The Road to Ruin is well worth a read to anyone with an interest in politics and current affairs. I look forward to hearing Savva speak about her book and the post-Abbott era at the Sydney Writer's Festival next week.
Posted by Ina Guddle at 17:03
Newer Post Older Post Home