Life and Death in a Small Town

On a whim I picked up a copy of Australian author Emily Maguire's novel An Isolated Incident (2016). This is a gripping thriller which exposes the dark truths of violence against women. It was such a good read that I found myself unable to put it down. 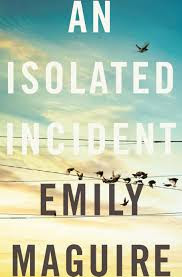 Set in Strathdee, a fictional town in the Riverina, which was once a stopover on the road from Sydney to Melbourne until the bypass was built and the town fell off the radar. The body of twenty-five year old Bella Michaels is discovered in a field, raped and brutalised. She was last seen leaving the local aged care home where she worked.

Bella's sister Chris is a local barmaid and sometimes prostitute. She is naturally devastated by the loss of her only sibling. Her grieving is made all the more difficult by the surge of media interest, gossiping locals, well meaning acquaintances, and the reappearance of her ex-husband Nate who she has never got over.

May Norman, a Sydney based journalist, writes click-bait stories for an online paper. She has been assigned to cover the murder and finds herself conflicted by her reporter's instincts and intrusion into the lives of those mourning Bella.

The book has an interesting structure with chapters alternating between Chris' first person narration, May's third person account, and articles May writes for her website. I really enjoyed the frank, unapologetic language, and the Australian voice which comes through in both these women and those around them. These are flawed characters, both self-destructive and troubled, but genuine and real.

This is a familiar story - a woman goes missing, is found dead, the media swarm and then lose interest, the police appeal for information and cross suspects off their list, marches take place, memorials are erected, the family grieves and then everyone moves on. But Maguire approaches this story in a new and interesting way.

The power of this book comes from Maguire's exploration of double standards women face (open sexuality, being the 'other woman', women who are 'asking for it') and society's blind eye to domestic violence. Throughout the book there are glimpses into family violence, where wife bashers are known to police and accepted as normal by neighbours. Everyone knows someone who is involved in domestic violence but no one acts. It is timely and necessary to keep domestic violence in the spotlight, and work to change attitudes. That a work of fiction can address this serious, complex issue in a compelling way, is a testament to Maguire's talents as a writer.
Posted by Ina Guddle at 08:12
Newer Post Older Post Home