When the Booker prize longlist was announced in July, I noted in my blog post that there were only two books on it that I was really keen to read: The North Water by Ian Maguire and His Bloody Project by Graeme Macrae Burnet.

As if I needed an excuse to visit a bookstore, I knew that the Burnet might be hard to find in Australia and nowhere seemed to have it stocked (some had never heard of it). In fact, there has been news that the publisher is having difficulty keeping up with demand.

So when I stumbled upon a single copy of His Bloody Project in a Canberra bookshop, I quickly bought it and began reading. I have not yet finished as I am taking it slowly to prolong my enjoyment. But I plan to pass it on to my mother in a few weeks who will find it of interest.

The Booker prize shortlist was recently revealed and it will come as no surprise that I am delighted that Graeme Macrae Burnet is on the list.

The shortlisted novels are: 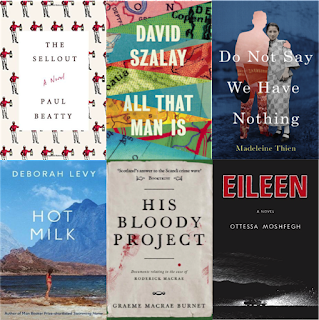 There is no obvious winner now that major names like Coetzee and Kennedy are out. So perhaps His Bloody Project has a chance... Winners will be announced 25 October 2016.
Posted by Ina Guddle at 07:33
Newer Post Older Post Home