A Life in Verse

I have always enjoyed the writings of Australian essayist, memoirist and poet Clive James. His wit and wisdom comes through in every line. Last year I purchased his Collected Poems 1958-2015 and have been slowly making my way through this epic tome, savouring every morsel. 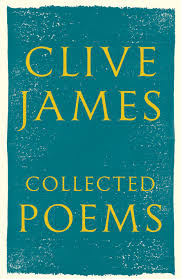 The five decades of verse contained within are wonderful. Despite leaving Australia for England in the 1960s, there is a fondness and longing for his birthplace that permeates many of the poems. Whether it is the song lyrics he wrote for Pete Atkin, of the poems he wrote while battling illness, each one demonstrates his intellect and ability.

The poems I liked best are ones about people, such as "The Young Australian Rider, PG Burman" and "In Praise of Marjorie Jackson". He also writes poetic letters to Martin Amis, Gore Vidal and others. The poems from his collection "Sentenced to Life", written when diagnosed with leukaemia, are so emotional and raw.

I loved the poem "The Book of My Enemy Has Been Remaindered" in which he takes delight at a competitor's bad fortune. His "Fridge Magnet Sonnets" reminded me of my dud attempts to composed poems on my refrigerator.

James' verse is so evocative. Some of my favourite lines are:

He asked her hand in marriage. She said yes. / Later he often said she must have known / To be with him was to be left alone (from "Flashback on Fast Forward")

Under the jacarandas / The pigeons and the gulls / Pick at the fallen purple / That inundates the grass / For two weeks in October. (from "Under the Jacarandas")

My cataracts invest the bright spring day / With extra glory, with a glow that stings. (from "Too Much light")

I know this will be a collection that I dip in and out of whenever I need to feed my soul.
Posted by Ina Guddle at 10:24
Newer Post Older Post Home