American blogger and columnist for the Guardian, Lindy West recently visited Australia for the All About Women Festival. She appeared on ABC's QnA and had a lot of interesting things to say about misogyny, body image and violence against women. So I grabbed a copy of her memoir Shrill - Notes from a Loud Women (2016) to see what else I could learn from her. 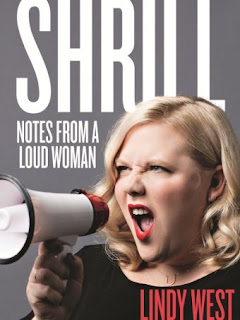 In a series of essays, West talks about the challenges of growing up fat,  internet trolls, abortion, pop culture, misogyny, bullying and more.  Having recently read Clementine Ford's Fight Like a Girl (2016), it was hard not to compare the two as they both cover similar ground. West's is better written (though still very bloggy), has more humour, and in some respects was more personal. It is at times emotional, suddenly hilarious and always thought-provoking.

A chapter that stood out for me is "Hello, I Am Fat" in which she recounts the difficulty of working with a boss who hated obesity. Lindy has landed her dream job as a writer for "The Stranger" in Seattle. Her boss Dan Savage regularly wrote fat-shaming pieces articulating his disgust. West approached Savage and told him how she felt having a boss writing pieces about people like her and when he didn't stop she wrote a post in The Stranger, 'coming out' as fat. In it she talks about how if her employer was so concerned about her health, he should also be concerned about her mental health and the impact of fat-shaming. The chapter covers this episode and it's aftermath. It is pretty powerful.

Another chapter that was interesting was about the comedy-club scene and misogyny. West was part of this scene, really enjoying comedy until she took a stand on rape jokes. A comedian in Hollywood made some rape jokes and a woman in the audience told him that it wasn't funny. The comedian then suggested it would be funny if she were gang raped in the club. West wrote a column about this incident and then went on TV to debate a comedian about it. The chapter made me think about whether there are some things that are never funny, or whether it is possible to use humour to throw shade on the perpetrators.

I wasn't familiar with West's writing before Shrill, and I quite enjoyed this book. However, if you only have room for one contemporary feminist memoir on your reading list, I would start with Roxane Gay's Bad Feminist (2014).
Posted by Ina Guddle at 16:24
Newer Post Older Post Home