It is a truth universally acknowledged that I love the writing of JK Rowling, especially the wizarding world of Harry Potter. However my last journey into this world was rather disappointing as I found Harry Potter and the Cursed Child (2016), the play based on a story by Rowling, to be seriously lacking. 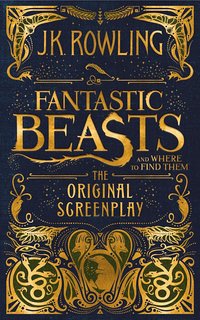 But then along came Fantastic Beasts and Where to Find Them, Rowling's screenplay of the latest film in the franchise. I saw the movie first, which I absolutely loved, and then quickly went on to read the screenplay.

Set in New York in the 1920s, British Magizoologist Newt Scamander arrives at Ellis Island with a case filled with his fantastic beasts. Some of his creatures escape from the case and Newt has to round them up before they wreak havoc and are seen by muggles (called 'no-maj' in America). Along the way Newt befriends no-maj baker Jacob, is taken to the Magical Congress by Tina, a witch trying to advance her career. There is also a temperance movement on the rise, attempting to quash any difference and encourage segregation. The story is entertaining but has a strong political backbone. 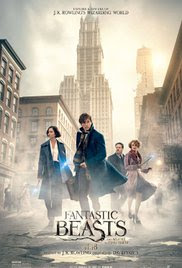 The movie was wonderful. Eddie Redmayne was delightful as Newt, Colin Farrell is mysterious as Auror Percival Graves, Ezra Miller plays Credence, a teenaged orphan wanting to fit in, and Katherine Waterston as the hotdog eating Tina. My favourites were Dan Fogler's Jacob and Allison Sudol as telepathic Queenie. The special effects were great and the set and costumes captured the period well. This is the first in a multi-film franchise so I look forward to seeing them all.

Reading the screenplay after seeing the film was interesting. I had expected there to be more in the screenplay - scenes that ended up on the cutting room floor or on the DVD extras. But it was more of a transcript of what happened on film, almost as if it was written after the fact. That was a bit disappointing as I thought I might learn more of Newt's world than was shown on screen.

I should also note what a beautiful book the hardcover screenplay is. Filled with illustrations and sketches, it is a gorgeous package. I would recommend the screenplay, but suggest you see the film first.
Posted by Ina Guddle at 08:31
Newer Post Older Post Home