Back in 2013 I read Gillian Flynn's bestseller Gone Girl (2012) and really enjoyed it as a gripping page-turner with an unreliable narrator. I then looked for Flynn's previous novels - Dark Places (2009) and Sharp Objects (2006) but somehow got distracted with other books and never read them. 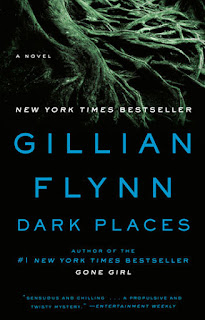 On a recent holiday I was keen for a good thriller, so decided to read Flynn's second novel Dark Places. The protagonist is Libby Day, an adult who has never quite found her place in the world. When Libby was only seven, her mother and two sisters were killed in a horrific crime. Libby testified against her fifteen year old brother Ben, who is currently serving life in prison.

Broke and unemployed, Libby takes up a paid speaking engagement from a group obsessed with the Day murders. Conspiracy theories abound, and many are convinced that Ben did not commit the crimes for which he has been jailed. Libby then had to confront her past, her memory of events, and unpick what happened.

What I liked about the story was the way in which the narrative switched from the present to the past, so we could see what transpired in the lead up to the murders and the aftermath. Being familiar with Flynn's writing, I anticipated that there would be more than a few red herrings and twists. I also appreciate that the characters are largely unlikeable, which appeals to me as a reader. 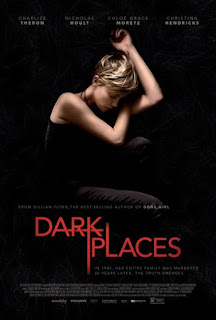 However there were a number of frustrations that drove me crazy. Many characters were underdeveloped (e.g. Diondra, Ben) and Libby was so boring that it was hard to care for her. There are grotesque descriptions of cruelty to animals and violence towards people that is both gratuitous and unnecessary. But the worst offence in this thriller is that the ending is totally implausible and rushed (there is no way the characters would have made the decisions they did on the day of the murders). As such, I won't be in a hurry to read other Flynn books.


A film of Dark Places was made in 2015 with Charlize Theron in the lead role. I have not seen it.

So, if you are looking for a good thriller, this ain't it. I would recommend you turn your attentions to the Cormoran Strike novels by Robert Galbraith (JK Rowling) or to some recent Australian thrillers like Jane Harper's The Dry and Emily Maguire's An Isolated Incident.