David Marr is one of my favourite writers. As a journalist he digs deep, researching his subject with an eagle-eyed intensity, and pulling out the story behind the known biography. As a writer he is sharp, quick-witted and empathetic. 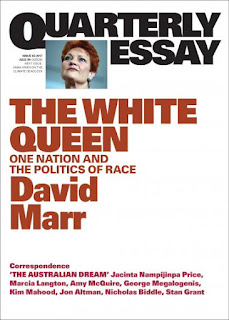 So when his Quarterly Essay (QE65) on Pauline Hanson arrived, I was thrilled to spend a weekend in Marr's company.  I was not disappointed.

The White Queen: One Nation and the Politics of Race, takes that which is known about Pauline Hanson and adds layers of analysis to explain her personal and political resilience and her attraction to segments of the electorate. Marr is interested in what makes Hanson tick. More importantly he seeks to discover what has happened to Australia and who we are today. He asks "what role does race play in the politics of the country?"

Hanson is a great lens to look at Australia's race politics through. She has made her career by denigrating Aboriginals, shrieking about Australia being 'swamped' by Asians, and more recently by calling for an inquiry into Islam and wanting Muslim immigration stopped. Her outspoken and often off-the-cuff comments demonstrate that she is media-savvy and knows what stunts will get her the publicity she desires. She preys on fear and manufactures panic.

Rather than condemn her as a racist, Prime Minister John Howard carefully adopted some of her views in order to attract voters from the margins. It is a fine line that the government and opposition walk daily as she now has some influence in the Senate. How do you call her out as a racist without condemning her voters are such?

In exploring race and politics, Marr looks at data from the Australian Electoral Study to try to understand whether the country is becoming more racist. He picks apart the demographics of current One Nation voters and what drives them. Marr is clear that Hanson is no Trump and she is not riding a wave of populism like Brexit. He argues she is not capable of withstanding sustained scrutiny and her star may fade before the next election.

While elections are won and lost on the fringes - the marginal electorates where more extreme views come to play - Marr points out that most Australians are in the middle, more optimistic and have more liberal views. There is reason to hope that Hanson and her ilk will slink off to the sidelines, but only if we all continue to challenge her hateful, racist views.

Also included in this issue were several thought-provoking responses to the previous Quarterly Essay (QE64) The Australian Dream by Stan Grant. Well worth reading.

I have previously enjoyed and recommend David Marr's Quarterly Essays on: