The Artist is Present

Heather Rose won the 2017 Stella Prize for her incredible novel The Museum of Modern Love. Set in New York in 2010, Rose has crafted an intricate story of love, loss and commitment against the backdrop of a real event. 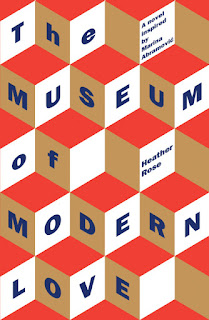 Serbian performance artist Marina Abramovic spent 75 days in residence at the Museum of Modern Art (MOMA). Along with a retrospective of her work, Abramovic staged a piece called The Artist is Present in which she sat at a table in the centre of a gallery opposite an empty chair in which attendees could take a seat for as much or as little time as they liked. Abramovic would not speak, but would engage by looking into the eyes of those opposite. Photographer Marco Anelli captured the exchange with every sitter. Many celebrities - Alan Rickman, Bjork, Colm Toibin, James Franco, Lou Reed, Lady Gage - took their seat with Abramovic, as did many others who made the pilgrimage to sit with the artist, some on multiple occasions.

Inspired by Abramovic, Rose has created a novel which focuses on several characters who are intrigued by Abramovic's piece. Jane Miller, a recently widowed teacher, observes countless sitters and talks openly to people in the queue.  Film score composer Arky Levin is struggling to find his rhythm now that his ill wife has moved out of the house. Brittika is a Dutch doctoral student who is writing about Abramovic. Each is somehow entranced by The Artist is Present, by the way Abramovic can sit, motionless, for hours on end, staring into the eyes of strangers. Through their observations of this piece of performance art, they learn about themselves and what they are capable of.

Abramovic herself is an interesting character. Rose has drawn from interviews to create her version of Marina, and Abramovic gave permission to be fictionalised in this novel. We learn about Marina's art, her family, her love and collaboration with artist Ulay. I must admit I often don't 'get' performance art - and much of Abramovic's work is too wrought with physical and emotional pain to bear. But The Artist is Present grew on me and I came to understand and become slightly obsessed by it. I wonder what would have been revealed about me if I had spent time with Abramovic. 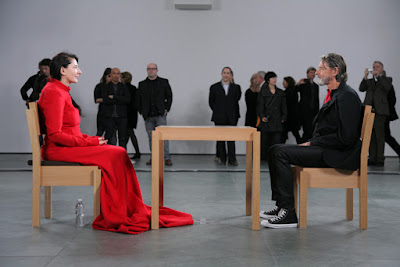 I absolutely loved this book. I started reading it in May, just before I went overseas. I was so engrossed in the story I debated taking the paperback with me. I ended up leaving it behind, but vowed to purchase another copy at Sydney airport to read on the plane, only to find none were available. So I had to wait five weeks to pick up where I left off, and during that time I thought regularly of all the characters and wondered what their fates might be.

Rose has done something wonderful in her blending of fact and fiction, and I think Abramovic would be delighted with the boldness and bravery Rose shows. This is an original work, and in the hands of a lesser writer it would have been a mess. But here we have a gently unfolding story, a meditation on what is art, and how art can save people.  I recommend this novel to anyone interested in art, love, and literature.
Posted by Ina Guddle at 22:28
Newer Post Older Post Home