Everyone is a Suspect

It has been many years since I last read an Agatha Christie novel. I had a minor obsession with Christie as a teenager in the 1980s, back when Peter Ustinov played detective Hercule Poirot in films like Death on the Nile and Evil Under the Sun. I read those key novels and Murder on the Orient Express as well as And Then There Were None. Then I moved on from Agatha and sort of forgot about her. 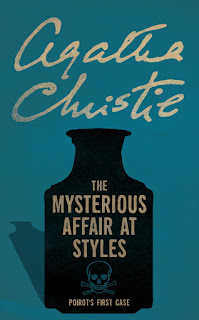 Last week I was rushing out the door to work and, having finished one book and uncertain what to tackle next, I grabbed Christie's The Mysterious Affair at Styles (1920) on a whim. This delightful novel became my commute companion and a warm nostalgia swept over me as I read this first story featuring Hercule Poirot.

The novel begins with Arthur Hastings, a soldier who goes to convalesce at his old friend John Cavendish's family manor Styles. John's stepmother Emily Inglethorpe has recently remarried a younger man, who is much loathed by the Cavendish family. There are concerns that he is a gold digger out to steal the fortune and property away from John and his brother Lawrence.

One morning the house awakes to a racket, as Mrs Inglethorpe is dying from being poisoned. But who could have done such a thing? Enter Belgian detective Hercule Poirot, a friend of Hastings who is staying nearby to wait out the war. Over the coming days Poirot makes many deductions and discovers a great deal of evidence. Poirot warns his friend that evidence can be too conclusive and that 'real evidence is usually vague and unsatisfactory.'

Christie is a masterful storyteller and a queen of the whodunit genre. She throws in enough red herrings to keep the reader guessing, and brings everything together in a room full of suspects where Poirot outs the true villain.

It was great to go back to the start and see how Christie introduces Poirot, who 'might look natural on a stage, but was strangely out of place in real life'. And now that I have begun again, I am keen to read more and see how the characters evolve.
Posted by Ina Guddle at 08:00
Newer Post Older Post Home