Once Upon a Time

I first heard about British novelist and short story writer Angela Carter two decades ago, when I was an undergraduate student. I took an English course called 'Major Women Writers' so I could explore Austen, Woolf, Eliot, Murdoch, Sand, Gaskell, Plath, Hurston, Morrison, Rich, Gordimer, Wharton and a bunch of Brontes. 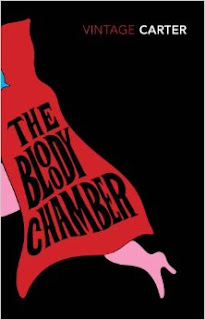 The year before I had taken a year-long course titled 'Major British Writers' which included NO women writers. When I protested to my professor he told me there were no female authors he would consider 'major' and that maybe I should go do 'women's studies or something' if I wanted to read these lesser storytellers. My rage lead me directly to the women's studies department and my subsequent Master in Gender Studies. But I digress...

Angela Carter came up on the syllabus of my 'Major Women Writers' course and I have a vague recollection of reading her stories back in the early 1990s. I recently became reacquainted with her work and have just finished The Bloody Chamber and Other Stories (1979). This collection of short stories is based on well known fairy tales but with a modern twist.

The macabre title story is based on the fairytale Bluebeard in which a wealthy older man marries a young girl and takes her to his castle, where she discovers the fate of his previous wives in a secret chamber. In Carter's version a teenage girls marries a twice-widowed French Marquis and heads off to an isolated castle. She discovers her new husband has a keen interested in pornography and S&M. He leaves her with a key to a room that must not be opened, but the temptation gets the better of her...

I quite enjoyed this opening story as in addition to the Bluebird familiarity, there were shades of Du Maurier's Rebecca, Bronte's Jane Eyre, Hill's Woman in Black and other tales. What I loved most was Carter's descriptive writing style creating a rich atmosphere.

The next two stories are variations on Beauty and the Beast, and I preferred 'The Courtship of Mr Lyon' to 'The Tiger's Bride'. I found it strange that they put these two stories back to back in the collection, and perhaps I would have enjoyed the second version more if I had put some space between the stories. Similarly, there are three werewolf stories at the end of the collection based on Little Red Riding Hood which must have been deliberately put together but the effect of which made me rather bored.

Highlights include Carter's 'Puss-in-Boots' - a funny story of a cat who lives with a promiscuous man, and helps him woo a young married woman - and 'The Lady in The House of Love' about a lonely vampire and a virginal English soldier. Her 'Company of Wolves' was made into a film by Neil Jordan in 1984.

Carter is undoubtably an excellent writer with her crisp, evocative prose and sharp wit. The feminist perspective is definitely present and when first published these tales may have been shocking, with the overt sensuality of the heroines, and the reinvention of gothic conventions. Over time, some of this boldness may have been lost. But what remains is a masterful, imaginative storyteller with a true gift for gothic literature.
Posted by Ina Guddle at 15:54
Newer Post Older Post Home