The shortlist has been announced for the 2017 Man Booker prize. The thirteen titles in the longlist have been whittled down to six.

When the longlist was announced I predicted Arundhati Roy, George Saunders, Moshin Hamid and Colson Whitehead would be shortlisted. Well, I was only half right; Roy and Whitehead were booted. Three Americans made the cut, which will undoubtedly reopen debate about whether the Booker should have expanded beyond Commonwealth writers.

The authors vying for the prestigious prize are:

I wasn't all that enamoured with the longlist, and so I find the shortlist disappointing. The only ones I expect I will read are Hamid and Saunders. I have started the latter and, if I had to guess, I would pick Lincoln in the Bardo to win. But don't take my word for it. I never get it right! 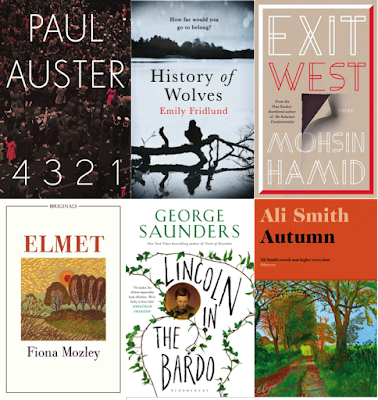