In recent weeks my attention has turned to some true crime podcasts - fascinating equivalents to a page-turning thriller. Indeed my 40 minute commute to work has not been long enough and I often reach my destination before the end of an episode and will want to walk around the block until it is done.

So here (hear!) are some of the podcasts I have been listening to lately. 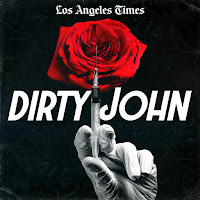 Annabel Crabb mentioned that she had been listening to Dirty John in a recent episode of Chat 10 Looks 3. Sounded good, so I downloaded one episode to try it and within 48 hours I had listened to the whole thing. I also told a friend about it and she binged the six episodes in one sitting. It's that addictive!

Dirty John is the true story of a Californian family. Debbie, a 59-year old divorcee and successful business woman, meets a handsome Anaesthesiologist on an online dating site. She goes on a date with John and quickly falls for him. Within weeks they move in together and, despite the reservations of Debbie's adult children, they are soon married.

Over time it becomes apparent that John is not exactly who he says he is, creating a wedge in the family. The story builds as we learn more about John's past, the nature of his character and the lengths he is prepared to go to to keep Debbie. Los Angeles Times reporter Christopher Goffard narrates the podcast, which was released along with a print version of the story in the Times.

Be prepared to binge, as you will be hooked. Learn more about on the Dirty John website. There is also an interesting piece in The New Yorker by Sara Larson called "Journalism as Noir Entertainment" about the success of Dirty John which is worth a read once you've listened to it. 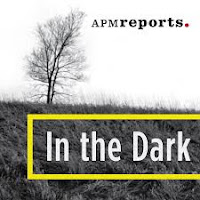 Once I had finished Dirty John, I looked for other similar podcasts and came across the Peabody Award winning In The Dark by APM reports. This podcast aired in 2016 and centres on a child abduction.

In 1989, 11 year old Jacob Wetterling was riding his bike to a video store with friends in rural Minnesota. They were approached by a masked man purporting to have a gun. He grabbed Jacob and kidnapped him. This crime gripped the nation and lead to 'stranger danger' campaigns and sex offender registry legislation.

For 27 years the mystery of what happened to Jacob went unsolved. Investigative reporter Madeleine Baran had spent nine months exploring this case and making a story about Wetterling's disappearance. A week before the podcast was due to air, an arrest was made, so Baran recut the first episode and release it early. The podcast is not about the mystery, but rather what went wrong in the investigation, what were the consequences, and what happened to those involved.

This podcast gave me a lot to think about and was an interesting expose on law enforcement, media and mass hysteria. More information can be found on the In The Dark website. 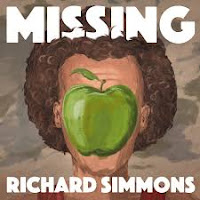 I heard about this podcast through an article I read in the New York Times in March 2017 by Amanda Hess, calling it a "Morally Suspect Podcast".

Richard Simmons is a fitness guru that achieved fame in the 1980s with a talk show, series of exercise videos (Sweatin' to the Oldies), and an exuberant personality. Journalist Dan Taberski lived in Los Angeles, attended Simmons gym (aptly named Slimmons) and was a regular in the weekly aerobic classes Simmons led.

In 2014 Richard Simmons abruptly withdrew from public life and cut off contact with many people. Taberski investigated to find out what happened to Simmons. The result is an eerie, stalkerish podcast which attempts to show concern for Simmons' wellbeing but makes wild speculations about what happened to this celebrity.

New York Times journalist Hess was concerned about the way in which Taberski blurred lines and invaded Simmons privacy,  accusing Taberski of relentlessly pestering Simmons and his friends. She is forthright in accusing Taberski of exploiting and sensationalising the Simmons story. She also argues that public figures have a right to a private life. Her sentiments echoed mine as a listened to this podcast.
___

The ethics of journalism always interests me and in listening to all of these podcasts (and to Serial, S-Town, Trace and the like), I have reflected on the delegate balance between public interest and privacy. Fair minded investigative journalists know where the line is. S-Town in particular made me really uncomfortable with its voyeurism into the life of a troubled man.

Earlier this year I wrote a review of Sonia Voumard's The Media and the Massacre, and I often think about her consideration of the media response to the Port Arthur killings and the ethics of reporters exploiting those associated with the tragedy.

Investigative journalists are required to probe deeply in their quest for truth. They take time to uncover and interpret data, find multiple sources, check facts and ensure accuracy in reporting. In this age of the 24-hour news cycle and reduced resources in news rooms, there has been a decline in quality and a shortcut of ethics. Tabloid, sensationalist, click-bait news stories are prioritised and long-form, considered journalism is diminished.

As one of the thousands of people who has listened to these podcasts, clicked on sensationalist stories, and rushed to judgement on something I have seen reported, I know that I too have a role in this. I have much more to mull over here...

So those are my latest podcast obsessions. Stay tuned for more Listening and Learning.
Posted by Ina Guddle at 10:04
Newer Post Older Post Home