The Law of the Land

Benjamin Law's Quarterly Essay (QE67) arrived in my mailbox this September, just before my same sex marriage survey did. The timing was prescient as Law's Essay, Moral Panic 101, was subtitled 'equality, acceptance and the safe schools scandal' and we were heading into a panic over the simple proposition that all people should have equal rights under the law to marry. 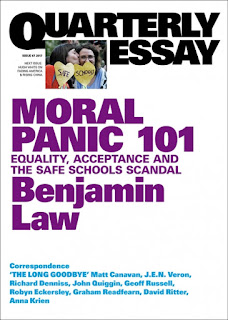 Throughout September, October and November the hysteria around same sex marriage has been overwhelming. Those opposed have campaigned on fear and loathing, with slippery slope arguments which will bring about the end of days. While those in favour have argued for equality from a place of love and human rights. It has been a horridly difficult time for many in the LBGTIQ community and their supporters. Fortunately the result was a clear victory for the Yes! camp and the legislation to bring about this change has just passed in the Australian Senate.

Law's essay is not about same sex marriage, but rather about the controversy surrounding the Safe Schools program. Essentially, Safe Schools was designed to address the problem of high youth suicide, particularly among LBGTIQ young people. The optional program would help schools be supportive and inclusive of LBGTIQ students, families and staff. The program was controversial largely because it was swept up in a moral panic by right wing media and conservative politicians.

Law explores the journey of the Safe Schools program from its origins to the hysteria surrounding it, and the eventual withdrawal of support from many states. Law deep dived into all the media reports about Safe Schools and from this was able to write with clarity about how the panic unfurled.

This was an emotional read: the tragedy of young Tyrone Unsworth who was driven to suicide at age 13 after relentless bullying; the bravery of  Caleb Nichols-Mansell who grew up gay in a small Tasmanian town; the passion of John Albiston, principal of a Victorian high school which adopted the Safe Schools program; and Law's own experiences as a young gay man growing up in conservative Queensland. These stories anchor the essay and make the reader ride waves of anger, grief and pride.

Law's writing is clear, frank, funny and packs a punch. This is an important essay and one that should be mandatory reading for parents, principals and politicians. Safe Schools has been pilloried when it should have been praised and funded. My hope is that now that the same sex marriage debate is drawing to a close, that young LGBTIQ people will feel supported by the overwhelming affirmation of equal marriage and that our nation will become more inclusive.
Posted by Ina Guddle at 09:14
Newer Post Older Post Home