Hillary Rodham Clinton's memoir What Happened (2017) is her attempt to come to terms with her surprise defeat in the 2016 American Presidential election. Despite winning the popular vote by almost three million votes, she lost in the electoral college, handing the Presidency to Donald Trump. 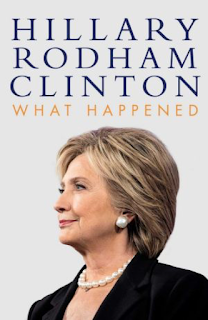 The book begins on what was perhaps the most difficult day of Clinton's life - the inauguration of Donald Trump. She could have been forgiven for staying away, but instead she steeled her nerves, smacked on a smile and raised her head. Her reason for attending was to secure 'the peaceful transfer of power' and to signal a need to bring the country together again after a bitterly divisive campaign. Trump's inaugural address as 'dark and dystopian... a howl straight from the white nationalist gut', and a sign of things to come.

In this memoir of life on the campaign trail, Clinton is searching for the answer to why she lost, especially to such an unqualified, odious person. She writes:


'How could sixty-two million people vote for someone they heard on tape bragging about repeated sexual assault? How could he attack women, immigrants, Muslims, Mexican Americans, prisoners of war and people with disabilities - and as a business man, be accused of scamming countless small businesses, contractors, students and seniors - and still be elected to the most important and powerful job in the world?'

What Happened is a statement not a question. Clinton ponders the range of factors that lead to her loss: the desire for change, the disenfranchisement of large swathes of the population, the interference in the election by Russia and Wikileaks, the sensationalist media, the lingering of Bernie Sanders, the rise of third party candidates, her lack of 'likability' and 'those darn emails'.

Since reading the book I have seen a number of reviews which decry What Happened, stating that she doesn't take responsibility for her loss. I disagree. Clinton owns up to her own mistakes, but rightly points the finger at those who deserve to share some of the blame. This notion that she should curl up in a ball and never speak again is ridiculous. 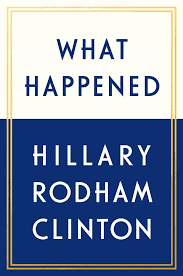 Aside from life on the campaign trail, Clinton is also deeply personal in this book and spends a lot of time sharing stories of her family, her faith and her daily life. I enjoyed the 'at home with Hillary' insights and wish she had shown more of this side of herself in the campaign.

The chapter on women in politics reminded me of Julia Gillard's memoir, My Story (2014) and the misogyny she endured on a daily basis. Neither woman could get a break, and had to work doubly hard to be heard. As I watched this election from afar, I desperately wanted Clinton to smash the glass ceiling and take office. As she recounts her experience on the day of the election, preparing for victory and then switching to a concession speech, my heart ached for her. Like Gillard, Clinton has a deep reservoir of resilience.

I have read some of Clinton's earlier books like It Takes a Village (1996) and Living History (2003). They were smart but left me somewhat cold. What Happened is all together different, like she has found her voice and is free from the shackles of giving a crap about what the trolls say. She is witty and sharp. Reading this felt like sitting down with her over a cup of tea and listening to her tell stories. She is warm, quippy, and doesn't hold back.

I would recommend What Happened to anyone interested in politics. As she writes during the first year of the Trump presidency, her policies and positions on a range of issues stand in stark contrast to his self-serving and divisive initiatives.Given the events of the past year, the outing of high profile sexual predators (including many Clinton supporters), and the winding back of policies to protect those at the margins, the world needs the leadership she would have offered.
Posted by Ina Guddle at 17:37
Newer Post Older Post Home