Ian McEwan's novel The Children Act (2014) is a slender volume which packs a punch.  The author wonderfully depicts the streets of north London, the drama of social services, the complexities of religion, and the challenges of family relationships. 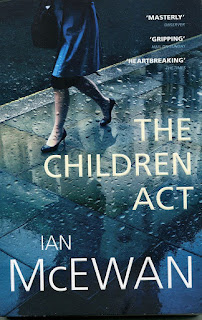 Now in her early sixties, Fiona Maye is a high ranking judge in Britain's High Court. Specialising in family law, each day she has to make difficult judgements on custody, spousal support, the division of family assets. While some of her cases are mundane or routine, there are others that are heartbreaking for which there is no good decision. Fiona battles between her heart and her mind, balancing up diverse interests and legal precedent to make decisions which she believes to be in the interests of those concerned.

Lately Fiona has had back to back cases which have truly tested her. She has had to decide between divorcing parents conflicting views on religion and child-rearing. She also had to rule on whether to seperate conjoined twins knowing that together they would both die but apart one might live. Now she is faced with a new case in which young Adam Henry is not quite of legal age where he may make his own decisions about his health, and Fiona must decide between his parents' wishes and those of the hospital.

While she faces intense stress and drama at work, her home life is also on the verge of unravelling. Her husband of three decades has decided he wants to have an affair with a younger woman - one last fling before he gets too old - and essentially seeks Fiona's permission. She refuses and is now in a state of flux, not knowing whether her marriage has ended.

Reading this book brought back floods of memories for me. I studied family law as part of my law degree and spent countless hours in courtrooms, so I had flashbacks when McEwan described some of the legal principles in Fiona's judgements.  Plus, whenever I travel to the UK I stay in London near where Fiona does, and I am well acquainted with the streets McEwan describes.

Last year The Children Act was adapted into a film, with McEwan as screenwriter. It stars Emma Thompson as Judge Maye and while I haven't seen anything more than the trailer (below), I reckon the casting is spot on!

I have a lot of Ian McEwan novels on my bookshelves, many unread. My first McEwan was Enduring Love (1997), given to me by a friend who moved to Britain when I moved to Australia and we used to send each other fiction from our new homelands. I really enjoyed The Child in Time (1987), Amsterdam (2001) and Atonement (2001) but then for some reason stopped reading his books even though I continued to collect them. The Children Act has encouraged me to pull some of his other books off my shelves and get reading.
Posted by Ina Guddle at 18:01
Newer Post Older Post Home