As soon as I cracked the spine on Patricia Highsmith's 1957 thriller Deep Water, I was hooked. For the next few hours I savoured every word of this suspenseful tale of a failing marriage. 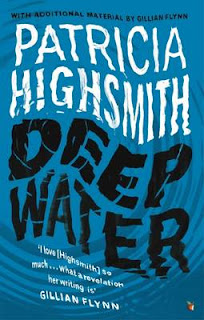 Set in a small town, Vic Van Allen is well regarded by locals. He runs a boutique publishing house, keeps snails, and dotes on his young daughter Trixie. His wife Melinda is unhappy in her marriage and spends every afternoon in the bar at the Lord Chesterfield Inn in an effort to meet good looking, available men.  Vic knows about Melinda's indiscretions, in fact the whole town does. She brings the men home, and invites them as her guest to neighbourhood parties, creating much awkwardness with hosts who suspect her unfaithfulness but don't want to upset Vic.

The Van Allens have an arrangement wherein Melinda can do as she pleases as long as she doesn't abandon Vic and their daughter.  In fact, Vic's only objection is that she chooses 'such idiotic, spineless characters'. His friends express concern at his being cuckolded and he is seen as having the patience of a saint while the frivolous Melinda drinks excessively and fawns over a seemingly endless parade of lovers.

When one of Melinda's former lovers is murdered, Vic scares off her current flame by joking that he killed the last one. But when another lover drowns, Melinda becomes suspicious that Vic has a hidden dark side.

Highsmith is an incredible writer and has a gift for creating complex characters who are not what they seem. She manages to make readers feel contempt for victims and empathy for a perpetrators. Suspense builds with each chapter and you never know what is going to happen next.

My review of Highsmith's The Talented Mr Ripley (1955) is also available on this blog. I am looking forward to exploring more of her novels this year.
Posted by Ina Guddle at 09:25
Newer Post Older Post Home