Casino Royale (1953) by Ian Fleming is the first novel to feature British Secret Service agent James Bond. Villainous Le Chiffre, from the Soviet counterintelligence agency “SMERSH”, is participating in a high stakes baccarat game at a French casino. In attendance are Bond and his female companion Vesper Lynd, CIA Agent Felix Leiter, and Rene Mathis from the French Duexieme Bureau.  After many rounds of baccarat, described in detail, by Fleming, Bond succeeds. Le Chiffre kidnaps Vesper as ransom for Bond’s winnings. When Bond attempts rescue, he is tortured. Vesper cares for the injured Bond as he recuperates in hospital, and the two become lovers. However Vesper holds a secret, which is revealed in a surprising twist at the end. 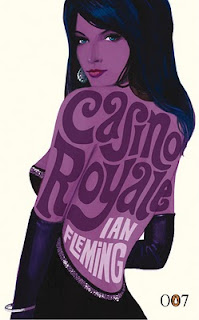 There were many lines in the book that got my feminist back up. For example: These blithering women who thought that they could do a man’s work. Why the hell couldn’t they stay at home and mind their pots and pans and stick to their frocks and gossip and leave men’s work to the men.

However it was written in the 1950s and many of the dated misogynist sentiments are laughable when read today (although his description of an encounter as having “the sweet tang of rape” is certainly not amusing). Fleming writes with such detail - the description of the baccarat game in particular is long and tedious. Missing here, for those who only know of Bond from the films, are the explosions and other action sequences. The book is fairly tame by comparison. 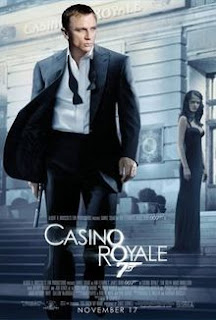 The 2006 film version of Casino Royale is the first to feature actor Daniel Craig as Bond. The film brings Fleming’s book to life and reinvigorated the Bond film franchise. The film adds in global locations (Bahamas, Miami Montenegro, Venice, as well as various places in Africa), romance, adventure (the opening sequence of running through a building site was amazing), action (blowing up planes, cars etc.) and updates the game to poker, which would be better understood by modern audiences than baccarat. The film is visually stunning and I really enjoyed it. My main criticism is the overt product placement that appeared throughout. But I admired Craig’s portrayal and the fact that his Bond got injured in fights unlike his pretty boy predecessors who emerged from encounters unscathed. Craig’s Bond is more faithful to Fleming’s vision of the character than any other actors who have portrayed him.

Fleming’s novels are interesting spy thrillers focusing on the Cold War. Bond is dark, cold, ponderous and a creature of his era – sexist and snobby. While I could do without the sexism, I enjoyed the novel. It is a quick read and a good introduction to Fleming’s work.
Posted by Ina Guddle at 10:52
Newer Post Older Post Home