When I was a teen the walls of my bedroom were plastered with posters of actors and musicians I admired. For many years, in prime position, was a large poster of Rob Lowe, with cigarette and saxophone, in character as Billy from St Elmo’s Fire. For most young girls in the 1980s he was an icon: pretty-boy and bad-boy rolled into one.

Stories I only tell my friends (2011) is Rob Lowe’s memoir of the highs and lows of his life and acting career. It is told as a series of stories as if he is sitting down with the reader and reminiscing about ‘this one time…’.


Lowe had a fairly unsettling childhood in Dayton, Ohio: his parents divorced when he was five; mom remarried and was divorced again by the time Rob was 12; his father was absent for much of his life and his mother struggled with serious mental health issues. Despite this, Rob knew at an early age that he wanted to act. He was involved in community theatre and sought out every celebrity that came to town for advice.

Moving to Malibu at 12, Rob became friends with Emilio Estevez, Charlie Sheen and Chris Penn. He travels by bus across Los Angeles to audition for every part going, does some after-school specials, and crosses paths with Janet Jackson, LeVar Burton, Sarah Jessica Parker, Daryl Hannah, Melissa Gilbert, Dean Cain, Ron Howard and various others who would go on to become big names. 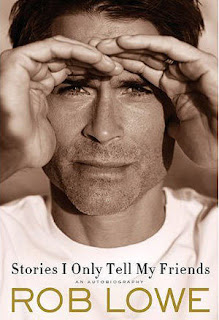 Lowe’s big break was Francis Ford Coppola’s The Outsiders and he spends a lot of time describing his time on and off set with Matt Dillon, Tom Cruise, Patrick Swayze, and the other actors who would experience a meteoric rise in stardom in the early 1980s. He goes on to tell stories of his post-Outsiders successes and failures; his relationships with a string of actress, models and royals; his involvement in a sex tape scandal; his battle with alcoholism that sends him to rehab; his move into comedy (Wayne’s World); his interest in politics; his marriage and parenthood; and eventually his experiences as Sam Seaborn on The West Wing.

While I enjoy autobiographies, I don’t often read celebrity memoirs. Despite my teenage crush on Rob Lowe, I didn’t really have much interest in him until he returned to prominence in The West Wing. But I read an excerpt of the book in Vanity Fair (May 2011) and enjoyed the candour with which Lowe described his auditions for Outsiders, which sparked my interest in his insider’s view of Hollywood. Reading the whole book, I found Lowe to be entertaining, witty and insightful. He can also be humble and self-depreciating. While there were parts that I wish he’d explored more deeply (he skims over some of the seedier aspects of his life), I respect his decision to tell his story the way he wanted to.
Posted by Ina Guddle at 07:44
Newer Post Older Post Home