I have enjoyed my reading in 2014, and again tried to balance my fiction and non-fiction reads as well as taking on new authors that I have not read before. I had hoped that the year would be a better one for reading and blogging, and overall I think it has been.

In January I wrote that my priority was  to finish books that I had already started, which included:

I managed to only finish three of those books (Atwood, Hitchens and Galbraith) as I was tempted away by others. While I started and stopped all of the others, they did not hold my interest at the time but may be revisited again in the future.

Instead, I read the following in 2014, in addition to those listed above:

In terms of fiction, it seems as though I read a few books on dysfunctional families, including those by Tartt, Tyler, Steadman and Sedaris. Each different in their own ways, but all demonstrating how families can move from places of love and security to fear and loathing. Of these books, Tyler's Dinner at the Homesick Restaurant was the stand-out for me - beautifully written, well crafted story.

While I continued to read Evanovich's Stephanie Plum series, I have been keen to find another series to sink my teeth into. JK Rowling's move into crime novels has been most welcome. I loved her writing as Robert Galbraith and consumed both The Cuckoo's Calling and The Silkworm in rapid succession.  I look forward to reading more of this series once Rowling has a chance to put pen to paper.


In terms of non-fiction, Kajsa Ekis Ekman's book on prostitution and surrogacy was an eye-opener and I was keen to read this after having heard her speak at the Festival of Dangerous Ideas.  I have also greatly enjoyed reading the Quarterly Essay this year and have written blog entries about two of the titles I have read:

In addition, I  reviewed the Sydney Theatre Company production of Macbeth which I attended in September 2014.

My 2014 highlights were two books by Australian authors. 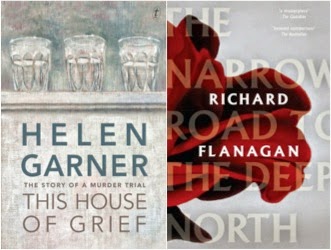 Richard Flanagan's Booker prize winning The Narrow Road to the Deep North was a stunning read and one I have thought about almost daily since finishing. I was so deeply touched by this story of love and war.

Helen Garner's non-fiction account of a murder trial, This House of Grief, was also a compelling read. The story of how Robert Farquharson was tried for drowning his three sons in a dam in rural Victoria was heartbreakingly brilliant.

Overall, I had a good year for reading and I have a number of books to tackle in 2015...
Posted by Ina Guddle at 11:53
Newer Post Older Post Home