I have just finished Richard Flanagan's The Narrow Road to the Deep North (2013) and am absolutely in awe of this magnificent novel and want to share it with everyone I know. A worthy winner of the 2014 Man Booker Prize, Flanagan has created a compelling story of love, mateship and war.

Dorrigo Evans is a young Australian doctor who heads off to war. Before he departs for the front, he meets and falls in love with Amy - the young wife of his uncle Keith. He travels to Europe and then Asia, ending up a prisoner of war on the Thai-Burma Railway, and all the while he dreams of a life with his beloved. 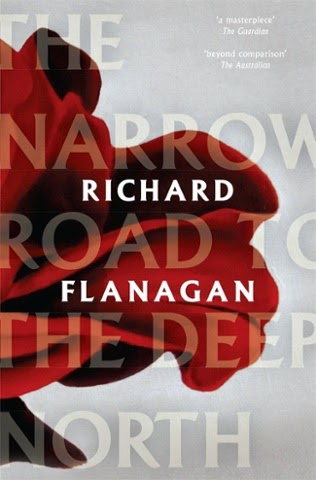 Because he is a surgeon, Dorrigo's job is to care for the men and ensure they are fit enough to work the line. Each day he counts out  hundreds of men, from an ever diminishing pool, fit enough to haul timbers, break rocks, and clear the dense jungle for the ill-fated railway. Suffering from starvation, ulcers, lice, cholera, beri-beri, malaria and broken limbs - those who can stand must work. Dorrigo knows that he is sending many to their deaths and he performs a delicate dance with his captors to negotiate on the men who will serve.

In the camps we hear about Rooster McNeice, Jimmy Bigelow, Darky Gardiner, Bonox Baker, Sheaphead Morton, Tiny Middleton, Gallipoli Von Kessler and others - and witness Australian mateship in its truest form. Tiny acts of defiance, kindness and love sharply contrast with the barbarity and horror of the war. Those who returned were never the same - suffering trauma that impacted their lives, livelihoods and the people who loved them. We also learn the fate of Colonel Kota, Major Nakamura, and other Japanese and Korean prison guards and get some insight into their views of the railway: their commitment to serving the Emperor, their sense of honour and their post-war reflections.

Told in a non-chronological order - the book jumps back and forth between the pre-war days, the POW period and the aftermath of war with the war crimes trials and Dorrigo's unwanted fame. The novel is littered with haiku from poets Issa, Buson and Basho - the latter providing the book's title. The simplicity and beauty of these brief verses are juxtaposed with the brutality of war and provide a glimmer of hope.

My heart broke many times during this story - with the tale of Darky Gardiner, Ella's unrequited love, the Tasmanian bushfire, the letter that changed fates and many other moments on the line. It is not an easy read but it is compelling.

Flanagan dedicated the novel to his father, who was POW on the railway. While this is not the story of Flanagan senior, it was certainly inspired by him and also by Edward 'Weary' Dunlop, an Australian hero of the camps. I learned a lot about the death railway through this book and it inspired me to seek out more information. Over 60,000 POWs from Britain, Australia, America, Holland and elsewhere worked on the railway and around 16,000 died from the physical labour, disease, starvation, and beatings while working the line.

I have read many of Flangan's previous novels - including The Sound of One Hand Clapping (1997), The Unknown Terrorist (2006) - and have consistently been impressed by his abilities to create full characters and reflect the beauty of the Australian landscape. In this novel, Flanagan's prose creates a vivid portrait of love and war. I am so pleased the Booker was awarded for this novel. 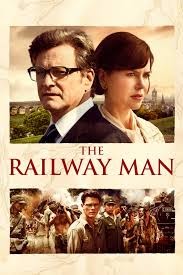 Shortly after completing this book I watched the film of The Railway Man (2013) based on the life of British engineer Eric Lomax. He was imprisoned in the death railway camps in 1942 and tortured for building a radio. He returned home a broken man and in old age sought out one of his captors. Starring Colin Firth and Nicole Kidman, it was a good film with solid performances. However, I felt that it didn't give the depth of experience and appreciation of the trauma that Flanagan's novel provided.
Posted by Ina Guddle at 09:08
Newer Post Older Post Home