The latest Quarterly Essay (QE56) by Guy Rundle is Clivosaurus: The Politics of Clive Palmer (November 2014). An intriguing tale of a politician and a flawed political system, Rundle has written a witty, pithy account of Palmer's political rise and what he may mean for Australia and our political system. 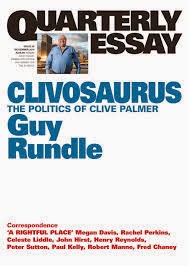 In 2013 Clive Palmer - Queenslander, self-proclaimed billionaire, mining magnate, dinosaur enthusiast and Titanic-fan - formed his own political party and sought appointment as the member for Fairfax in the federal election. The Palmer United Party (PUP) was initially dismissed by the media and the mainstream parties as a sideshow without any chance of winning, but surprised many by securing one seat in the House of Representatives and two in the Senate. Canberra hasn't been the same since...

A larger-than-life figure, Palmer has always seemed to me to be a bit of an eccentric, bumbling clown - thumbs-upping in photo shoots, making up policy as he goes along and generating publicity stunts. Whether it is through his twerking on TV, storming out of interviews, or his policy flip-flops, I could never seem to get a handle on who Clive Palmer is, and what he hopes to achieve. I cynically presumed he took to politics to further his own ego and to serve his own ends (like reducing taxes on mining companies). In this essay, Rundle attempts to get to the heart of the mystery - who is Clive Palmer?

Along the way we learn about Palmer's upbringing, his business ventures and his poetry (Rundle drew heavily from Sean Parnell's Clive - The Story of Clive Palmer (2013) to flesh out Palmer's backstory). This was extremely interesting and presented Palmer as a much more complex character than I had given him credit for. While Palmer's philosophy and politics do not align with mine, and I am still very sceptical about his motives, I can no longer write him off as merely a media-hungry buffoon.

Rundle's essay also exposes the flaws of the Australian political system - which is marred by loop-holes and complexities. The number of fringe candidates, satirical parties, and outright odd-balls that make it on to the ballot (and worse still into Parliament) is evidence of a system that needs review. The system can be gamed, with 'preference-whisperers' and backroom deals, resulting in the election of people with very low primary votes. But this is not new, rather it is a known problem that no one seems willing to tackle.

Illuminating the 'triple lock' of the Australian system - compulsory voting, preferential voting and taxpayer campaign funding - Rundle shines a light on areas that need to be urgently addressed. He calls for an open discussion about creating a more democratic system and lists items for inclusion in this debate (voluntary voting, multi-member electorates, optional preferences, campaign spending, role of the governor general). I whole heartedly agree.

Clivosaurus was another excellent essay in this series. My reviews of past Quarterly Essays are also on this blog: