It is Friday 22 May 2015 and Day 2 of our SWF begins. It is a horribly wet and cold day - perfect for curling up on the sofa with a mug of tea and a good book, not great for tramping about the piers, standing in line and trying to keep dry! But there are too many good sessions to see, so armed with umbrellas and anoraks we ventured out to the festival.

Linda Mottram, ABC 702
Our first stop was to sit in on a broadcast by Lindra Mottram at ABC radio 702. She was talking with Sahar Amer, author of What is Veiling (2014) and Dr Mehreen Faruqi, a member of NSW Legislative Council for the Greens party, and the first Muslim woman in an Australian parliament. This was a fascinating discussion about the veil in its various formats, whether it is oppressive, its history and attempts to ban the burqa. Then Richard Fiedler came on to chat with Norman Doidge about neuroplasticity, which would have been fascinating, but we had to move on to catch our next session.

Helen Garner: Lives and Writing
We begin our day listening to Helen Garner in discussion with Tegan Bennett Daylight. Readers of this blog will know how much I enjoyed Garner's latest book This House of Grief (2014) about the trial and conviction of Robert Farquharson. This was, without doubt, one of the most engrossing books I have read in the past year. 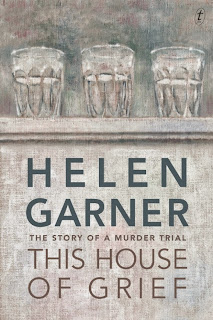 Unable to attend Garner's session at the All About Women festival in March, I was thrilled to hear her speak at SWF. During her session, Garner began by reading from her debut novel Monkey Grip (1977) which she said she had not looked at in 25-30 years as it would be "too mortifying". After reading the richly evocative passage, she exclaimed "Hey, that's not bad... But it has an awful lot of adverbs in it."
An interesting discussion ensued with Daylight, who remarked on the pace of the story. Garner stated that "as a woman I always felt I didn't have people's attention for very long... No one was going to pay attention to me long enough to say things slowly." She likened it to the feeling of running across a stage, and said that she always talks fast and tends to "gabble".

Garner struggled with her second book. She wrote one that wasn't publishable. She said "I produced this pathetic thing, and in my heart I knew it was crap." But she salvaged the best bits and turned them into the stories "Honour" and "Other People's Children".

She spoke about Cosmo Cosmolino (1992) and how it was received. She says that there is a character like her in all her novels.

They then turned to her non-fiction with The First Stone (1995), Joe Cinque's Consolation (2004) and her most recent book, This House of Grief (2014). The discussion of the Farqaharson case was fascinating, as she said she faced criticism for refusing to portray him as a monster. While what he did was horrendous, "what you see is not a powerful monster, but rather a pathetic figure, a lost soul."

After the session mum and I spoke to Helen and got her to sign my copies of Joe Cinque's Consolation (2004) and The First Stone (1995). I told her how I read Cinque in law school and how I have sent it to many friends. Mum asked her where she did her writing and she said she rented a room, as writing at home has too many distractions.

When Journalists Become the News
This was an open session at SWF in which journalists talk about their work and what happens when the tables are turned and they become the story. In attendance were Maxine McKew, Sarah Dingle, Peter Lloyd, and Christopher Warren (from the Walkleys).

McKew became the news when, after decades as a journalist, she turned to politics and ousted Prime Minister John Howard in 2007. She talked about how she had a "golden ride" from the press but how different it was when she got into office.

Dingle also chose to become the news when she elected to be interviewed about being a child born from a sperm donor and her search to find her father's identity.

Lloyd did not willingly become the news, but rather found himself in the spotlight when arrested in Singapore for drug possession.

All three spoke about the importance of knowing who you are, and understanding that the journalists are just doing their jobs. McKew said that she had changed and that you "become more guarded... You are only going to get a version of me."

This session was interesting but I found the room very noisy with the clatter of dishes from next door and the sounds of water rushing through the pipes very distracting. We also had a really long queue and had to wait around 40 minutes to get in. So while it was good, there were also a number of negatives.

Anna Bligh: Through the Wall
I was keen to attend this session in which Bligh spoke about her memoir Through the Wall (2015). Bligh was the first female Premier of Queensland and is very much a trailblazer. She has written this book about her career and her battle with cancer. 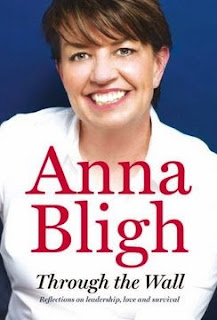 At SWF Bligh talked about the three themes of her book - leadership, love and survival. She spoke about the Australian ideal of egalitarianism and said the "gap between those people who can realise the opportunities of this country and those who are prohibited is growing." This gap "should worry us all". She pointed to the difficulty the federal government had with the last budget as indicative of this ideal and the desire for "a sense of fairness in our economic circumstances."
She talked about ambition and being warned by a close colleague about being seen as to ambitious. Bligh said "if we are talking about male leaders we see ambition as a positive quality... But for women the word ambition has ambiguous qualities."  Ambition "seems to be at odds with what we see as feminine." But she says we won't see more women in leadership unless we encourage ambition in women.

Bligh spoke of the Labor party, the union movement and the challenges of modern political parties. She is proud of her handling of the 2011 floods, in which she demonstrated tremendous leadership and empathy. She also acknowledged her failure to communicate the need to privatise some government assets. In terms of a quieter achievements she cited adding a year of schooling for Queensland students to bring them in line with the rest of the country.

Bligh's session was reminiscent of Julia Gillard's session - both strong, resilient, intelligent, Labor leaders who were trailblazers. Bligh acknowledged she was the first in Queensland, but said it was the second, third and fourth women premiers that take it "from novelty to normal" and embed female leadership.

The sessions I wanted to see today but did not are:

So ends Day 2 of SWF. We have an early start tomorrow!
Posted by Ina Guddle at 21:06
Newer Post Older Post Home