Sadly we have come to the last day of our 2015 Sydney Writers Festival. It has been a wonderful few days and I suspect that this will become an annual event. 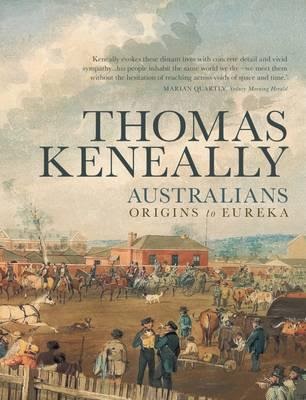 Mum has a particularly keen interest in Australian history and so we were thrilled to attend this session in which Tom Keneally and David Hill spoke about how to make history engaging through the stories we tell.

Keneally is a living legend. Most people know him for his novels like Booker Prize winner Schindler's Ark (1982), The Chant of Jimmy Blacksmith (1972), and the more recent Shame and the Captives (2014). But he has a comprehensive catalogue of non-fiction as well, including his three volumes of Australians.


David Hill is an Australian non-fiction writer known for his works 1788: The Brutal Truth of the First Fleet (2008), Gold - The fever that changed Australia (2010), and The Great Race: The Race between the English and the French to complete the first map of Australia (2013). His latest book is The Making of Australia (2015).

Keneally and Hill are a delightful pair and as they took to the stage and got themselves sorted, Keneally joked that they were a "geriatric comedy duo." There were certainly a lot of laughs, as the two men bantered for an hour about various figures from Australian history - some well known and some unknown. There was a lightness about this session, but they also brought history to life.
Hill said that "telling the story through villains and heroes makes it much more interesting" and proceeded to tell us about the logistics of the First Fleet and some of the individuals involved. They both spoke about the changing role of women and how much of Australian early history has been recorded from the perspective of the white military officers, but very little from the poor, women, or the Indigenous people they encountered when they arrived in Australia. Hill said these officers had a "disparaging view of the lower class" and this was reflected in their accounts.

"The flappers were a serious phenomenon" said Keneally, as for the first time in history women were able to shorten their skirts, bob their hair, drink with men and "initiate sexual dalliance." They spoke about the first Miss Australia, a woman named Beryl Miles who, as Keneally explained was "the girl we want to bear future Anzacs" in a time where there was an emphasis on eugenics.

Hill went on to talk about the Fairbridge Farm, the subject of his book Forgotten Children (2007) and explained how British children were taken from the UK and brought to Australia as child migrants. Keneally said it was a case of two problems and one solution: the problems of too many poor in Britain and needing white stock to colonise Australia could be solved with child migration. Children as young as four were taken away from their homes and transported to Britain. Hill himself was one of these children as he and his two brothers were taken from his mother, when he was only eight years old. Fortunately for Hill his mother soon followed and the family was reunited, but for many others they were subject to neglect and horrific abuse. Fairbridge Farm only closed in 1974, so it is still a contemporary problem and not some secret from our past.

During question time, they were asked who they would like to have a cup of tea and a chat with. Keneally said "My hero of this story has to be Lachlan Macquarie" and the other person was Captain Bligh.  Hill said Deakin and Caroline Chisholm. They were also asked who they thought was the greatest Australian: John Curtin according to Keneally; and Gough Whitlam for David Hill.

The two authors were so incredibly knowledgable, witty and informative that I would have loved to stay with them all day and learn all that I could. The hour flew by and it was time to go. 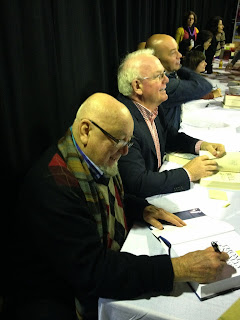 After the session we went along to the book signing. David Hill signed a copy of Forgotten Children: Fairbridge Farm School and its Betrayal of British Child Migrants to Australia (2007) for me, and The Making of Australia (2015) for mum.  We spent some time chatting with Tom Keneally as he signed a copy of Schindler's Ark (1982) for me and Volume 2 of his Australians: Eureka to the Diggers series for mum. He said he is hard at work on Volume 4 of the series, so we will have to get reading to catch up.

The sessions I wanted to see today but did not are:
Today was Family Day - with a lot of activities and events for children which is a terrific way to encourage reading in young people.

So ends our SWF for 2015. A couple of thoughts overall about the Sydney Writers Festival:

All in all, it was a wonderful event and I will definitely be attending again next year. The highlights from the 2015 Sydney Writers' Festival for me were:
Posted by Ina Guddle at 07:29
Newer Post Older Post Home