Every morning Rachel Watson commutes by train to London. The train always stops momentarily at a signal box outside Witney and, while paused, Rachel peers into the houses backing on to the tracks and imagines the lives of the inhabitants. One day a woman goes missing, a woman Rachel has seen daily from the train, and Rachel becomes involved in the investigation to find the missing woman. 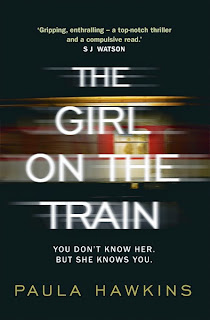 Paula Hawkins' The Girl on the Train (2015) is a gripping page-turner. It has been compared to Gillian Flynn's Gone Girl (2013) which is fitting for a number of reasons. They both involve alternating unreliable narrators, missing wives, unlikable characters, and are clever thrillers about domestic relationships. While I enjoyed both books, I think it is wrong to dismiss Girl on the Train as a Gone Girl knock-off. It can stand on its own.

I don't want to say too much about the plot so as not to spoil it for readers, except to say that while there are some aspects that seem implausible, it does not detract from the enjoyment of the story. What did detract was the dates on each chapter as the novel flits back and forth in time, which I often found confusing. This could have been simplified by adding a subtitle of time in relation to the date the woman goes missing.

Rachel, Anna and Megan - the three women at the centre of this novel - are all deeply flawed, and intricately intertwined. I really liked that these women were each in their own way struggling with their lives and their pasts. These characters bring to mind Roxane Gay's essay "Not Here to Make Friends" on unlikeable female protagonists which is included in her book Bad Feminist (2014). Hawkins has created characters who are addicts, unhappy, manipulative, desperate and trapped, but who are also relatable in so many ways.

The Girl on the Train is an enjoyable, light read - perfect for beaches or train rides. It has been optioned for a film which should be an exciting thriller. This is Hawkins' first novel and I look forward to what she comes up with next.

My review of Gone Girl is also available on this blog.
Posted by Ina Guddle at 10:36
Newer Post Older Post Home