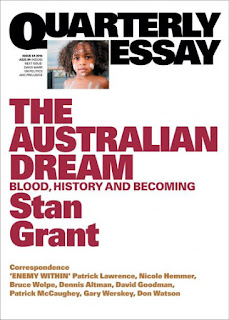 I thoroughly enjoyed the latest Quarterly Essay (QE64) by journalist Stan Grant. The Australian Dream - Blood, History and Becoming (2016) is a powerful reflection on the place of indigenous people in the history of Australia. In the wake of the recent inquiry into abuses at the Don Dale centre, the attempts by the government to overturn sections of the Racial Discrimination Act, and the hounding of Adam Goodes, this is timely and important essay, which should be essential reading for all Australians.


Grant's essay begins with "The Speech", a presentation he gave at the IQ2 debate in Sydney in late 2015. The transcript of this speech makes up the first chapter of this essay. It is a remarkable speech, but far more potent when viewed as spoken by the man himself when it was "unrehearsed and unscripted".

Following the speech, the video of his address went viral on social media. It attracted commentators and critics. But more importantly it made Grant think seriously about his aboriginality and the place of his people in modern Australia. The result is this finely crafted essay.

Taking us back to the invasion and colonisation of Australia, Grant explores the dark history of the way in which indigenous people were brutalised over decades - from massacres and removal from land, to the stolen generations and interventions of modern times. He compares the indigenous experience to one of new migrants carving out a place for themselves in colonial society.

Grant also shares a history not often told, one of economic engagement, ingenuity and self-actualisation. He talks of a growing indigenous middle class, in which talented, well-educated, aboriginal people are making the most of their skills to define their own Australian dream:

The sacrifice and resilience of our forebears has created a burgeoning indigenous middle class: confident, self-assured. They are redefining what it is to be indigenous … the grandchildren of people who emerged from oppressive Aboriginal missions in a segregated Australia are as at home on the streets of New York as Dubbo.

Grant is someone who is well aware of his own privilege. But he is angered by the requirements of indigenous Australians to decide whether they will be mainstream or black - as if someone has the right to determine who is and is not indigenous and that these two identities are mutually exclusive.

I learned a lot from Grant's essay and look forward to reading more of his work. His book Talking to My Country (2016)  was published earlier this year. I also heard Grant speak at the Festival of Dangerous Ideas when he introduced Alicia Garza to talk about Black Lives Matter, where I recall him questioning the very notion that black lives matter was a dangerous idea. He is currently the Indigenous Affairs reporter for ABC News. I look forward to seeing what comes next from Stan Grant.

Included in this essay is correspondence related to the previous Quarterly Essay (QE62) Enemy Within.