The Half-Life of Society

This week I attended the Sydney Theatre Company's production of Speed-The-Plow, directed by Andrew Upton. I had no real expectations of the play, knowing only that it was written by David Mamet and has previously starred Madonna and more recently Lindsay Lohan.

Speed-the-Plow is a three act play that spans 24 hours in the life of a 1980s Hollywood film producer. Bobby Gould has just been promoted to head of production at the studio. His office is currently being renovated - leading to a stark set of a half painted suite, minimal furniture and many boxes. He is reading through a stack of manuscripts when Charlie Fox bursts into his office. Fox has been approached by a big actor wanting to star in a prison movie project that Fox had pitched some time ago. The actor has given Fox 24 hours to secure a green light from the studio. Gould and Fox are gleeful when they think about all the money they can make as co-producers of the film and its inevitable sequels. Problem is that Gould can't approve a film of this budget without the approval of his boss, who won't be available until tomorrow. 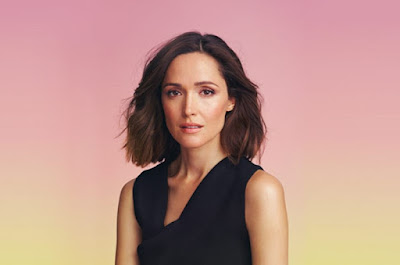 Enter Karen, the temporary secretary. Fox bets Gould $500 that he can't get Karen to be interested in him. Gould accepts the wager and approaches Karen - would she mind reading through a literary novel and assess its suitability for the screen? The novel is called The Bridge or Radiation and the Half-Life of Society. Gould has no intention of making the film, but if Karen can read it and stop by his home tonight with a précis, then perhaps he has the chance of winning the bet.

The second act is set at Gould's home, presumably some fashionable pad with tremendous views. Karen and Gould sit on the floor, glass of wine in hand, as she tells him about how wonderful the book is. Byrne shines in this scene as she convinces Gould of this book's merits.  The final act is the next morning, back at Gould's office. He has completely changed following his evening with Karen and has some news to share with his old friend Fox.

Damon Herriman plays Gould convincingly. He is a versatile actor who undergoes a complete transformation in the span of 90 minutes - from brash to indecisive, smarmy to haunted. Lachy Hulme is a bold Fox, injecting humour and banter then becoming frustrated and aggressive. The two men play well off each other, and their role reversal between acts one and three is well done.

Karen is played by Rose Byrne, an Australian actress best known for her work in American television (Damages) and film (Bridesmaids, Spy, X-Men). It is her face on the poster and her name that will draw the crowds, despite this play relying on three strong performances. I like Rose Byrne and I thought she was quite good in this play, moving from clumsy to coy to confident.

The play itself is rather dated. It is a satire of the Hollywood movie machine that endlessly produces blockbuster sequels, and was undoubtedly seen as more risqué in the late 1980s. Today it seems rather shallow and void of any urgency. I am not sure why it was chosen for revival, other than to provide a vehicle for Rose Byrne to tread the boards in Sydney. It also felt like it should have been staged in a smaller theatre, as the set took up only a portion of the stage and could have been more contained.

Ultimately, I enjoyed my night at the theatre but would not consider this a must-see. I much preferred my previous trips to STC to see The Wharf Revue, All My Sons,  King Lear, and The Present.