In my post US election funk, I found it hard to engage with any new book - picking up and putting down several novels, without the ability to connect with any of them. I read copious amounts of articles on the aftermath, all of which have culminated in my view that 2016 has been the year that the world has gone to hell in a handbasket. Good thing I love dystopian fiction, as I fear dystopia is going global soon.

But then I found Joan Didion. Her remarkable book The Year of Magical Thinking (2005) has given me the reboot I need to get out of my funk and engage with life again. 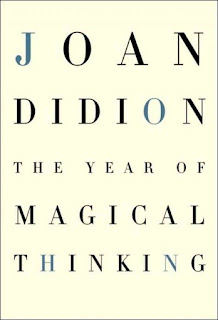 In late 2003, Joan Didion and her husband of forty years John Gregory Dunne visited their adult daughter Quintana in a New York hospital. Several days earlier Quintana had suddenly collapsed and was placed on life support. Her parents returned home, sat down to dinner, and Dunne suffered a massive heart attack and died. Suddenly widowed and trying to care for her only child, Didion tries to make sense of what has happened to her family. This book documents her first year of widowhood, and how she comes to terms with her loss.


Repeated throughout this memoir is a recurrent phrase:


Life changes fast. Life changes in the instant. You sit down to dinner and life as you know it ends.

This ordinary instant is timeless - and Didion returns to the moment when her husband had his heart attack repeatedly. Could he have been saved? Did he know it was going to happen? If they had made different decisions in the years and months before - an alternate holiday, an overseas posting, a different place to live - would the outcome have been different?

Almost twenty years earlier John had an angioplasty which saved his life. John has spent the years after believing he would die from a cardiac event, while Joan viewed the intervention as a permanent fix to a temporary problem.

I loved how she described marriage and the nature of relationships. The critical eye she turns on herself as she tries to make sense of her situation. She writes beautifully about self-pity and the notion of grief as something that should be handled quickly and quietly. She describes it thus:

There were passages that made me think of those I have lost - my father, my grandparents - and my struggle to see them as gone. She talks about coming home, in the months after John has passed, desperate to tell him some piece of news:

Each person grieves for those they love in their own way. Didion chose to channel hers into this memoir. I came to her book without expectation. Reading it made me feel slightly like a voyeur in someone else's tragedy. But the book didn't feel tragic to me. It was a wondrous example of self-reflection, a critical gaze in a ghastly time, an honest attempt at sense-making.

It is strange to think that this memoir has made me feel more hopeful and positive, but it has somehow. And that is really magical.
Posted by Ina Guddle at 22:20
Newer Post Older Post Home