The Wretched and the Damned

Booker Prize winning author Richard Flanagan and Archibald Prize winning artist Ben Quilty are two men I admire greatly. Flanagan is the author of The Narrow Road to the Deep North (2013), an environmentalist, and an activist who serves as an ambassador for the Indigenous Literacy Foundation. Quilty has campaigned against capital punishment and is known for his portraits of the impact of war. 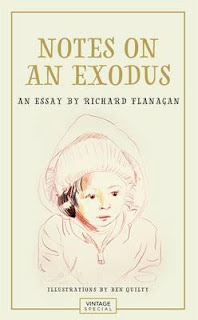 In early 2016 the two travelled together to Greece, Serbia and Lebanon to examine the mass exodus of refugees from the unending conflict in Syria and record their experience in a moving essay on the refugee crisis, Notes on an Exodus (2016). These notes give a human face to the abstract. Each chapter is a few hundred words and focuses on a different person or family who has fled their homeland to escape Daesh or the bombings from the Assad regime.

Here we meet Raghda, who makes dresses in a Lebanese camp after leaving Raqqa when Daesh arrived and began killing. She was at risk as a seamstress because she works with nude mannequins and says of the terrorists 'Whoever treats humans like they do is not human'.

Mohanad is a 24 year old dying of diabetes and kidney disease. His family is in debt because it costs so much for the life saving dialysis he needs but could not get in Syria after the government bombed the hospital where he was treated.  He mourns for the life he had in Syria and wishes it was safe to return.

Feisal was leader of his village where he lived a good life as a fruit farmer. He and his family fled to Lebanon when the missiles came. Now his whole village has relocated. The children learn at a makeshift school and dream of becoming doctors and teachers who will one day rebuild their homeland.

Nine year old Jamal earns $3 a day for his 10 hour shifts as a welder. His younger brother Omar collects plastic bags which he sells for 80 cents to buy four flat breads. These funds are vital to support their family who fled Aleppo. Their thirteen year old sister is getting married to a cousin, so another family can care for her and there is one less mouth to feed.

It takes only twenty minutes or so to read this slender volume, but the magnitude of these stories are vast and deep. Harrowing tales bring the plight of the refugees to life - you can feel the chill in their makeshift tents, smell the fumes from the garbage they burn to keep warm, marvel at the resilience of people who have lost children on doomed boat voyages, and feel rage against the people smugglers who sell fake life jackets to the desperate souls.

Flanagan concludes with a reminder that many of us hail from refugees who have fled previous conflicts, and that we have a collective responsibility to support our fellow human beings:


Refugees are not like you and me. They are you and me. That terrible river of the wretched and the damned flowing through Europe is my family. And there is no time in the future in which they might be helped. The only time we have is now.

My only quibble with this book is that I would have liked more of Quilty's artwork. His illustrations of some of the refugees detail the impact of war and the hollow ageing of those living in camps.

These stories are available on the Guardian website and through World Vision. The authors recommend donating to World Vision and calling on the Australian Government to spend more money on helping the Syrian people.
Posted by Ina Guddle at 06:00
Newer Post Older Post Home