Stain on our Nation's Soul

In 1838 a posse of convicts travelled from farm to farm searching for Indigenous Australians. They found a group of around 28 Wirrayaraay men, women and children who were peacefully camping at Myall Creek Station. The posse rounded up these defenceless people, tied them together and marched them to a most gruesome death, before burning their bodies. The posse thought they would get away with it, as who would care about the killing of Aborigines? NSW Attorney General John Plunkett was determined to put these men on trial at a time when charging white men with crimes against blacks was unheard of. 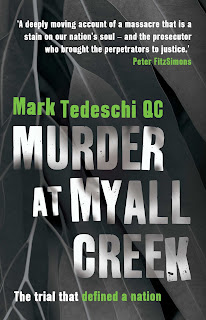 Senior Crown Prosecutor Mark Tedeschi QC has written a remarkable book about this shocking massacre in Murder at Myall Creek (2016). But more than a devastating true crime account, this is an exploration of John Plunkett and a story of the early days of the colony.

Plunkett was an Irish Barrister who had faced discrimination at home due to his Catholicism. In 1832, newly married and eager for a fresh start, Plunkett and his young wife travelled to NSW to take up the Solicitor General position. When he arrived he found a colony divided with factions of convicts, former convicts and non convict settlers.

At the time of the massacre, the murder of Indigenous Australians at the hands of white settlers was a common occurrence. As such, when Plunkett sought to charge the stockmen with the murders, society was divided as to whether they should be convicted or praised. Plunkett and his wife were socially ostracised and pressured to give up the cause, but he perservered.

Plunkett never received the praise he deserved in his lifetime, and has been largely forgotten. Indeed, I cannot recall hearing much about him during my years in law school. He was committed to equality before the law, and throughout his tenure in NSW he worked to legally protect Aborigines and give them a voice in the law. More than Australia's legal system, Plunkett shaped the whole colony by ensuring a separation of church and state, reforming the education system, and abolishing many corrupt and inhumane practices that existed in the colonies.

Tedeschi brings his legal mind and research skills to this case, and his clear admiration for Plunkett is evident throughout. In fact, this book is more of a biography of Plunkett, than a true crime story. While it may not be a book for everyone, it would certainly be of interest to those who enjoy Australian history and those with a desire to learn more about one of Australia's great legal minds.
Posted by Ina Guddle at 21:32
Newer Post Older Post Home