A few months ago I read the wonderful An Isolated Incident (2016) by Emily Maguire about murder in a small town in rural Australia. I really enjoyed Maguire's book for both its feminist storytelling and its evocative portrait of the sunburnt country. 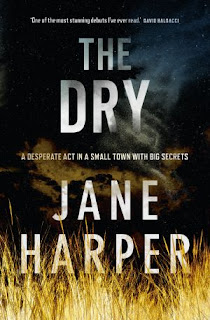 I was reminded of Maguire's book when I picked up Jane Harper's debut novel The Dry (2016). Further, I was also reminded of Truman Capote's In Cold Blood (1966) in which a family is massacred on a rural property and local law enforcement is trying to understand how and why it occurred.

The Dry is set in the fictional town of Kiewarra, Victoria. Federal Police investigator Aaron Falk returns to his hometown to attend the funeral of his childhood best friend Luke Hadler. The community is divided as it appears that Luke killed his wife and son before killing himself.

Murder-suicide is not uncommon when times are tough and the drought has been hard on farming families like the Hadlers. Luke's parents ask Falk to investigate so they can put their minds at ease, and Detective Raco welcomes the assistance. But the longer Falk stays in town the more he has to confront the demons of his past.

Harper has recreated small town Australia and its relationship with the drought in a realistic way. Sun-bleached paddocks, dusty landscapes, crops and animals that are desperate for rain, boarded up shops on main street, and people struggling to cope.  Everyone has a secret, and some people will go to extraordinary lengths to keep theirs.

What I enjoyed about this page-turner was the way in which Harper drip feeds clues. A letter with the words "you lied" sparks questions - to whom? about what? - that only get answered as the book rolls on. Characters emerge and their backstories are fleshed out. The story twists and turns until the whodunnit reveal.

I really enjoyed Harper's novel and I am looking forward to her next offering. According to the author's website, she is working on another novel for release in 2017 which features Aaron Falk. Could he be the next Cormoran Strike? Maybe, just maybe...
Posted by Ina Guddle at 14:58
Newer Post Older Post Home