Down in the Holler

The cover of the book spoke to me. It is an "International Bestseller", having spent 28 weeks on the New York Times bestseller list (at time of posting) with boastful claims:

So would JD Vance's Hillbilly Elegy: A Memoir of a Family and Culture in Crisis (2016) live up to expectations?

Hell yeah! This is an important, timely memoir that helps to explain the ways in which poor white Americans have been disenfranchised and have consequently grown distrustful of institutions. Since finishing the book a few weeks ago, I have found myself frequently pondering the plight of Americans in the rust-belt. 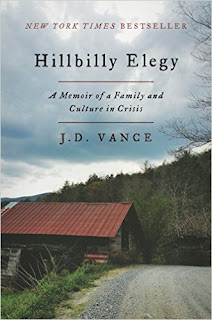 In part, this is a tale of survival. Vance had a challenging childhood in Ohio - his mother was an addict, bringing an ever revolving door of father figures into the home to destabilise the family. Moving home frequently, Vance relied on his older sister and their grandmother, the outspoken Mamaw, to make them feel safe and loved. Against all odds Vance found a life for himself, first in the Marines, and later at Yale law school where he found a mentor and champion.

Vance uses his compelling personal narrative to address social, economic, cultural and political issues which have arisen and that the government seems ill-equipped to deal with. He describes Middletown Ohio as a small city where life revolved around the Armco steel works. Almost everyone in town was somehow affiliated with the company, and when the company declined, so too did the town. Poverty came when people lost their homes, or sold them at a loss, bringing with it a range of social issues - teen pregnancy, domestic violence, addiction, crime and welfare dependency.

The author talks about the lack of work ethic (characterised by laziness, disrespect and abandonment) while at the same time a culture of consumption in which people would rather buy the latest phone than spend their money on healthy food for their children. Some of the conditions he describes are squalid and unhealthy - like "Mountain Dew Mouth" in which people in Appalachia have such poor teeth because of the volume of soft drink consumed. Vance describes the learned helplessness of many who blame the government, immigrants and others for their woes, but doesn't let them off the hook, insisting they take responsibility for their own circumstances.

I have long been fascinated with Appalachia, having spent some time in the Blue Ridge Mountains many years ago. I also enjoyed the series Justified, set in Kentucky's hillbilly country, which explored many of these issues. Through Vance I have a greater understanding of the hillbilly kinship system - loyalty and honour are highly valued in this community. Vance is empathetic to his people and is proud of his heritage, even though he has moved out of the holler.

While I doubt Vance set out to write a book that provides "a great insight into Trump and Brexit", and certainly neither of these events are covered in the memoir, the timing of the publication is fortuitous. Many working class white voters in middle America yearn for days gone by, when manufacturing was big and people had jobs for life at the local factory or mine. They resent the Big City Cultural Elites of the knowledge economy, they resent losing their jobs to automation and outsourcing, and they resent the globalisation forces that are forever changing they way they live.

Issues of class and race are not unique to America and while reading this I could not help but draw parallels to Australia and the rise of right wing populism here. I also thought a lot about The Spirit Level (2009) and the argument that we need to actively build more equal societies. Unfortunately we still lack the political will to address the underlying issues. But eye-opening books like Hillbilly Elegy may make people pause and think about the world we want to live in. It has certainly been thought provoking for me.
Posted by Ina Guddle at 12:35
Newer Post Older Post Home