I had never heard of Sonya Voumard until the Stella Prize longlist was released in early February, but I was intrigued by the sound of her nominated book, so quickly borrowed it from my local library and read it. The Media and the Massacre (Port Arthur 1996-2016) is an investigation into the nature of journalism and the ethics involved in the hunt for a good story. 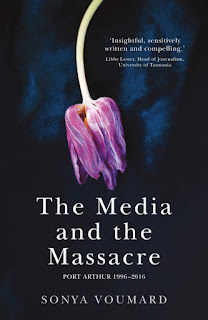 On 28 April 1996 a man drove to the Port Arthur historic site and opened fire on the tourists and workers, killing 35 and inflicting trauma on dozens more. At the time it was the world's worst civilian massacre by a lone gunman, ushering in an era of gun control. There would be few adults in Australia who would not recall where they were when they heard about the massacre.

Sonya Voumard is a former journalist turned academic, and this book arose from her doctoral thesis on the ethics of storytelling.  Her background gives her an acute understanding of what drives journalists in their work and the ethics they ascribe to. It also gave  her access to reporters and editors to interview for this work.

Voumard writes about how the media covered the massacre, at the time, in the aftermath and on anniversaries. She depicts the journalist's adrenalin-fueled quest to be best and first - first on the scene, first to file, first to get the best photos and best interviews - and the sometimes questionable tactics used to meet deadlines.

Much of Voumard's investigation centres on the best-selling book by Robert Wainwright and Paola Totaro, Born or Bred? Martin Bryant and the Making of a Mass Murderer (2010). This work began as a memoir by Carleen Bryant, mother of the perpetrator, who withdrew from participation in the project when she felt she would not be represented fairly. Wainwright and Totaro persevered, using Carleen's notes without consent thereby opening a legal and ethical can of worms. Voumard explores the breakdown of this relationship, with evidence from various sources, leaving the reader with the distinct view that the authors exploited Carleen and her naïveté about journalism and publishing.

There were other accounts, like Carol Altmann's After Port Arthur (2006) which explores the effects of the massacre that linger a decade later. Voumard also talks to many journalists and editors about the impact the story had on them - the trauma of covering the story and bearing witness to such a horrendous act  - and some had even left the profession.

Her interviews with Simon Longstaff about professional standards are fascinating. It was interesting how little redress is available to someone who has a complaint about the behaviour of journalists.

Importantly, this book is not about the massacre itself or the man who committed the crime. It is about ethics and journalism, and as a consumer of media it made me think about sensationalist news stories and the need to engage critically.

While I appreciated Voumard's thoughtful exploration of the ethical issues, particularly around the journalist and the subject, I felt rather flat when I finished wondering whether there is any hope for a profession that has become some depleted by the 24 hour news cycle and an erosion of standards. My hope is that this book is read by journalists and students of journalism and it causes some introspection and reflection on the integrity of their profession.
Posted by Ina Guddle at 09:40
Newer Post Older Post Home