Readers of this blog will know that I love Helen Garner! Her incredible coverage of the Farquharson murder trial in This House of Grief (2014) was my favourite non-fiction title the year it was published. Her collection of essays and diary entries, Everywhere I Look (2016) was marvellous.  I last heard her speak at the Sydney Writers' Festival in 2015 while promoting This House of Grief. Three years later, Garner is as dynamic as ever. 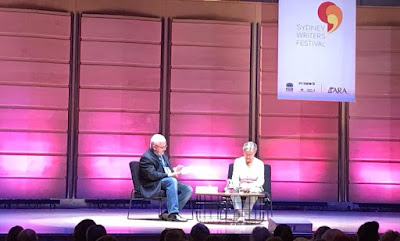 Helen Garner's Savage Self-Scrutiny (Thursday 3 May 2018)
To a sold out crowd at the City Recital Hall, Garner spoke with Matthew Condon about her writing life. For an hour they reflected on her early days, her approach to writing, and her current role as a courts columnist for The Monthly.

Garner spoke about how, after three attempts, she realised she had 'no talent at being married' and how she  'crashed through' people's lives during the 1970s. Her early fiction draws on elements from her past.

The discipline of writing daily in her diary for at least an hour, has resulted in countless volumes of her transcribed thoughts. She feels the 'urge to preserve' even if nothing ever happens with these diaries.

Unexpectedly, Garner spoke about the time she visited a faith healer in an effort to seek relief from her sore back. She re-enacted the encounter to great applause, 'healing' Condon and crawling on the floor. She spoke of her faith and how her back pain was relieved by simply purchasing a new pen. 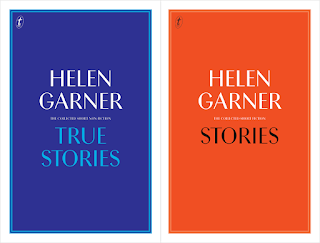 Garner described how she finds stories that appeal to her. Reading the paper in the morning she may discover news of a trial underway. She will ride her bicycle down to the courts and sit in on the hearing to ascertain whether it is worth writing about. If the defendant is clearly a monster, she will avoid writing about the trial, preferring cases where an ordinary person behaved in a manner out of character. For this reason, she chose not to follow the trials of Ivan Milat.

Perhaps the best insight from Helen Garner was her mantra of  'let your life be your witness' which she learned from her friend Tim Winton. Instead of worrying about your legacy and what you leave behind, simply live a good life. Words to live by.