After a long day at the Festival, I opted for a shorter Sunday of only four sessions.

Amy Goldstein - Janesville
Washington Post journalist Amy Goldstein is interested in how economics affect people. She spoke with George Megalogenis about her book Janesville - a case study in the impact of the recession on a Midwestern town. 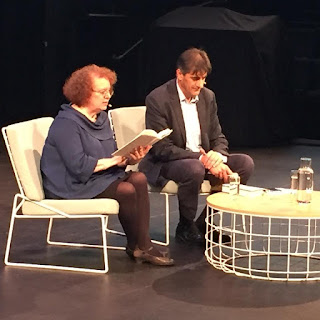 During the global financial crisis, Goldstein was looking for a story about people falling out of the middle class onto welfare. Goldstein said that 'The American dream has a forward trajectory and these people were heading downward.' While most reporters were taking the macro-view, Goldstein went to Janesville Wisconsin, a microcosm of what was happening.

Goldstein wanted to write about this particular downturn, not decades of boom and bust. So Janesville was the right place as it had survived past depressions/recessions. The General Motors plant was the main employer in Janesville, and most of the other businesses in town were suppliers to GM or the people who worked there.

GM was having difficulty, as the gas-guzzling SUVs made at the plant were not selling due to the high price of petrol. Instead of changing to another vehicle, GM decided to close its plant - ending the employment of 9,000 of Janesville's 63,000 people.

Goldstein followed three families for five years to see what would happen to them. One of her most interesting findings was around the retraining of retrenched workers. Surprisingly, she found that those who did not undertake training were better off.

Last year I read JD Vance's Hillbilly Elegy, a fascinating first person account of growing up in the rust-belt. Janesville sounds just as interesting, and if it was good enough for Obama, it is good enough for me. I bought a copy of Janesville, signed by Goldstein. and look forward to reading it.

Wood and Daylight spoke about writers who use laughter in their writing which beings about a rhythm. Daylight is a huge fan of George Saunders and read extracts of his short stories. Wood agreed that 'Saunders' humour is in the sadness'. Wood finds Anne Enright is funny in a dark way, likewise Edna O'Brien is self-depreciating and puts humour in her woundedness. 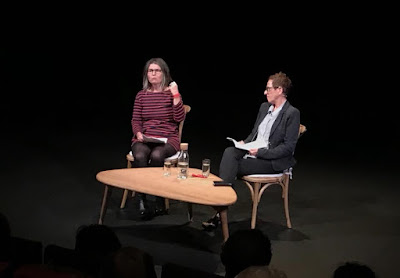 The authors talked about Australian novelist Kim Scott and how he uses humour to diffuse the hurt, and that play is an important part of his work.

They spoke about boring characters and how witty they can be. Daylight told how Jane Austen does this in a brilliant way - for example in Pride and Prejudice's Mr Collins, who is pompous and boring. Wood recommended the pretentious Maynard in Joan London's The Good Parents.

Saying the unsayable is also a source of humour. They referred to Helen Garner's essay 'The Indignity of Age' and Elizabeth Strout's Olive Kittredge, where older women behave appallingly.

They then turned to their own works and how they use humour. Neither author is promoting new works (alas!), but I can highly recommend Daylight's Six Bedrooms and Wood's The Natural Way of Things.  When Natural Way was being published in America, the publishers changed 'ute' to 'pick-up' and a few other Australian-isms were lost. I think this is a shame, as readers can look words up and learn as they read. But Wood and Daylight found the humour in that.

Various Speakers - The Changing Face of Australia
My final panel of the festival was on the topic of the shifting make up of Australia with the influx of migrants from China, India and the Philippines.

Race Discrimination Commissioner Tim Soutphommasane spoke of the waves of migrants - British, then European, and then, once the White Australia Policy ended, increasingly non-white migrants from all over the world. He said that 85% of Australian feel multiculturalism is good for our nation, and 80% say we should not discriminate with immigration. He spoke of the dangers of the global rise of far right movements. 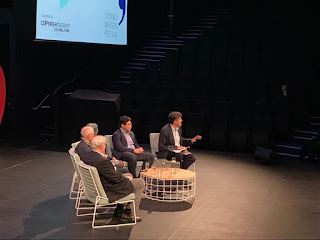 Former Foreign Minister Gareth Evans said he has been advocating for diversity for 50 years. He spoke of the decline of learning Asian languages in school and how short-sighted that is. He also spoke about Peter Dutton and his dog-whistling (e.g. favouring white South African farmers over Syrian refugees).

Linda Jaivin spoke about how we talk of 'China' without realising that Chinese is not a homogenous group. We also speak of China when we mean the political institutions and we should be referring to Beijing, the way we speak of Washington or Canberra. Jaivin is a huge advocate for Australians learning more about Chinese culture, history and language. It was great to hear Jaivin speak, as I admired her Quarterly Essay on translation.

The Lowy Institute's Richard McGregor spoke about how in America the elite is culturally diverse, but in Australia it is not. He spoke about the changing global world order, with China wanting America to go through a bourgeois decline.

I really like George Megalogenis as a writer (e.g. Quarterly Essay QE61) but not so much as a facilitator. In both sessions today it felt like he was disinterested and disengaged. He spoke to the audience coldly and (as he wanted to monitor the session times) was frequently checking his phone, which gave the impression of disrespect to the speaker and those in attendance. I would think twice before attending his sessions in the future.

Jennifer Egan - Closing Address
The final session of the Festival was the closing address by Pulitzer Prize winning author, Jennifer Egan. I didn't know what to expect from this session, only that she would be talking about technology and fiction. She said she thought it was ironic that she was taking on this subject since she still writes all her novels by hand. 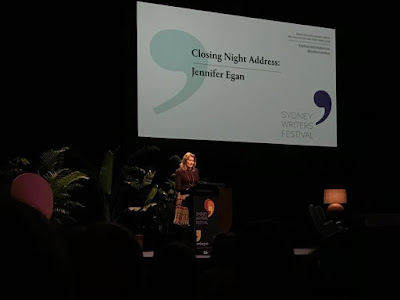 Egan described her youth and how she took a gap year in 1981 when she realised she didn't want to be an archaeologist but had no other plan. She backpacked across Europe at 18, armed only with a Eurorail pass and a journal. In those days she was genuinely isolated from everyone, but 'writing tied me to the world'. She said she would 'never have experienced the solitude that lead me to be a writer' if she were doing this today.

She spoke of the nostalgia we often have for a time we never experienced, and how this has fuelled her writing. Egan then went on to talk about her various books- Invisible Circus, Look at Me, A Visit from the Goon Squad - and her latest Manhattan Beach. In each one she has experimented with form - for example, Goon Squad was designed to be like a concept album and has a chapter written as a PowerPoint presentation. She also described the Twitter Novella she wrote called The Black Box, for the New Yorker.

Egan also spoke about the importance of empathy, how it is our chief tool as writers for bringing people into another person's consciousness. If writers do this well, people will read.

It was an interesting lecture and a great end to the festival.

Final Musings
A few thoughts on the festival itself: I have been to the Sydney Writers' Festival quite a few times and I have always struggled to pick sessions as there have been so many I want to see, often two or three in each timeslot. This year I felt the program was a bit flat, and I struggled to find sessions I really wanted to attend. I really liked the new Carriageworks venue - it is warmer and easier to hear speakers there than the Wharf venue. The walk to Seymour Centre was not too far. I am also pleased to see Gleebooks is still involved. I will definitely be back again!