With a lot on at work, I was looking for a quick and easy, escapist read. I grabbed a copy of Lee Child's Killing Floor (1997), the first novel in the bestselling Jack Reacher series, and read it on my daily commute over the course of a week. 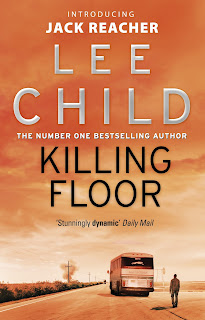 Reacher is a former military police officer who was passing through the town of Margrave, Georgia when he was arrested for a murder he knows nothing about. Without identification or an alibi, Reacher is definitely in the wrong place at the wrong time. As he works to convince Detective Finlay and Officer Roscoe of his innocence, Reacher needs to figure out who the real killer is to be exonerated. But what looks like a simple murder is actually a much bigger crime with far reaching consequences.

Having spent several days with Jack Reacher, I am utterly perplexed by the popularity of this series. Reacher is a ridiculous confection - tall, handsome, smart, and able to take out five guys with his bare hands, he easily picks up the only woman in town for mind-blowing shower sex, and inevitably breaks the case wide-open.

A few times I felt like giving up on this book, but I kept going as it was an easy read and there was enough of a plot to move the story along. But the prose is dreadful, with Child relying on short, dull, repetitive sentences ("There was carpet"). The dialogue is simplistic and the mystery has gaping holes. I also had to remind myself that the book is twenty years old, when I was wondering why they were using fax machines and landlines. And yet, there was enough momentum to make me want to learn how the story would pan out.

From what I understand Child's writing improves as the 22 books in the series progress. I doubt I will read any more Reacher novels but at least I now know what the hype is about.
Posted by Ina Guddle at 06:00
Newer Post Older Post Home