The Sydney Writers' Festival begins in a month's time and I am eagerly trying to read books by many of the writers I will be seeing at the festival. One of the headliners is American writer Meg Wolitzer, bestselling author of The Female Persuasion (2018), The Interestings (2013) and The Wife (2004). I had not read any of her books, but as I was keen to see the recent film version of The Wife, starring the incomparable Glenn Close, I decided to start there. 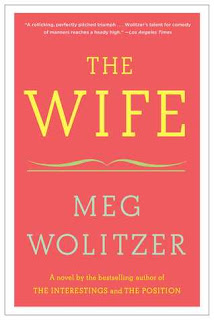 Joan is the wife of a famous American writer, Joseph Castleman. They are en route to Helsinki where Joseph is due to collect a prestigious literary award for his life's work, when Joan realises that she has had enough and must leave him. Having been married for four decades, she has suppressed her desires and her talents to attend wholly to his needs. She has turned a blind eye to his philandering and quietly suffered his humiliations.

Told in flashback, we explore their meeting at college when he was a young teacher and she was his student and a burgeoning talent.  They began an affair, ran off to New York and his literary career began while she cared for their three children.

It is easy to despise Joe Castleman. He is an odious hack who uses his wife terribly. A 'master of the universe' with adoring young fans, who lacks any sense of self-awareness or shame. But it is also hard to fully comprehend Joan and her willingness to put up with the one-sided arrangement she made with Joe. Throughout reading I had to keep reminding myself that she is a woman of a different era, married in the 1950s when expectations were different and women had fewer options. She gave up her studies, her career ambitions to became his doormat. Her fear of being 'small and ordinary' lead her to hitch her wagon to his star, even though he is wholly unworthy.

I really appreciate Wolitzer's writing. She manages to create a real sense of place and being. I laughed aloud at some of her prose, for example, when she described how the excitement of an international flight fades: 'The air, once so antiseptic, was now home to a million farts and corn chips and moist towelettes'. What I particularly enjoyed was Wolitzer's sharp feminist critique of the place of female writers - how they are dismissed and diminished in the literary world. In one scene  novelist Elaine Mozell is talking with Joan about how women's voices are silenced and that females have more success as short story writers 'as if maybe women are somehow more acceptable in miniature'.

My introduction to Meg Wolitzer was extremely gratifying and I look forward to exploring some of her other works. 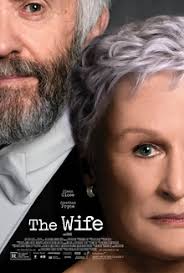 Late last year a film adaptation of The Wife was released, starring Glenn Close as Joan Castleman and Jonathan Pryce as her husband Joseph. Jane Anderson adapted Wolitzer's novel for the film and Bjorn Runge directed it.

I watched the film a few days after reading the book and I really enjoyed it. There are a few changes from the novel, but it is a largely faithful adaptation.

Glenn Close is brilliant in all things, and was nominated for pretty much every acting award for this performance, winning the Golden Globe. Beneath the cool exterior are layers of emotion, and the camera often focuses on Close's face so we can see the depth of her feeling. Pryce is also excellent, and the key scene between them on the night of the award gala is an acting master class by both leads.   It is well worth watching for this scene alone.