The winner of the Stella Prize was announced this week with Vicki Laveau-Harvie being awarded the prize for her memoir The Eratics. 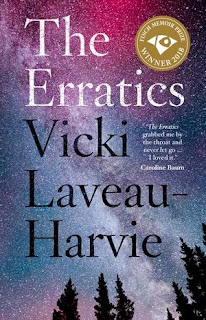 The book traces the author's return to Alberta, Canada to care for her estranged parents when her elderly mother breaks her hip. Over a six year period she learns of her mother's narcissistic personality disorder and her father's trauma.

The judges described the book as follows:


The winning book elegantly tramples all over the Stella requirements: it is excellent, engaging and original in spades. It is moving and funny, and as powerful in what it leaves out as it is in what it includes.

The Erratics is Vicki Laveau-Harvie's debut as a writer. She claims she will use the $50,000 prize money to travel. Which will hopefully inspire her to write more.