The Women's Prize for Fiction Shortlist has been announced! The Longlist has been whittled down to a handful of titles: 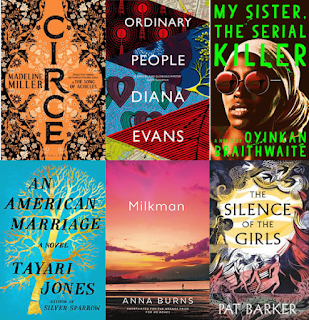 I had expected Burns to make the list, after her Booker win for Milkman, but was surprised to see Sally Rooney's Normal People cut.

I was a bit perplexed by the shortlist, in that there are novels with similar themes together  - such as Miller and Barker who both write feminist retelling of ancient stories. And I was disappointed that Greenberg-Jephcott's Swan Song was left off the list.

I will be seeing Braithwaite this week at the Sydney Writer's Festival, so at the moment she has my vote to win.

The Winner will be announced on 5 June 2019.
Posted by Ina Guddle at 06:48
Newer Post Older Post Home