Unable to take time off work to attend weekday sessions, I am making the most of my evenings and have an action-packed weekend scheduled. My festival companion and I have chosen a wide array of sessions - some together, some apart - selecting topics of interest and some new authors with whom I am not familiar.

Over the course of SWF2019 I will be hearing from some amazing writers like Gillian Triggs, Oyinkan Braithwaite, Rachel Kushner, Daisy Johnson, John Purcell, Gabbie Stroud, Kerry O'Brien, Chloe Hooper and Susan Orlean.

So here's a summary of my first few sessions...

Suffragettes, Referenda and Sausages (Thursday 2 May 2019)

This panel session is subtitled 'The History of Democracy in Australia'. Journalist Annabel Crabb sat down with historians Judith Brett and Dr Clare Wright to talk about politics. 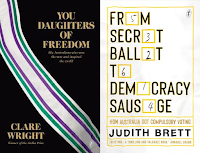 This session was so interesting and I learned so much about how unique Australia's electoral system is - with the legal requirement to register, compulsory voting, accessible weekend voting, and the independent electoral commission which protects against voter suppression and gerrymandering - all reasons that over 96% of eligible population are enrolled to vote.

What particularly fascinated me was Wright's discussion of women's suffrage and how influential Australian women were in the British suffrage movement, supporting their 'less fortunate British sisters'. Wright shared some stories of the innovative ways women pressed for the right to vote. Both Brett and Wright spoke about our shameful history of denying rights to Aboriginal men and women, sharing excerpts of overtly racist political speeches. Wright reminded today's politicians that 'Historians in one hundred years will judge you on what is recorded in Hansard' - the transcripts from our Parliament.

After the session I purchased Wright's book and spoke to her while she signed it for me. Can't wait to read it - although it may be some time, as the 400+ page hardcover is not a book I will be taking with me on my Moroccan holiday later this month! 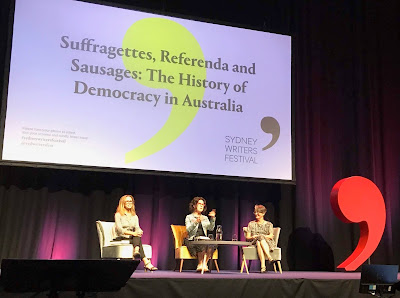 I have huge admiration for Gillian Triggs, former Human Rights Commission President. I have heard her speak previously at events and always found her to be an intelligent,  passionate and empathetic advocate for human rights. My festival friend and I were keen to hear Triggs speak with Dr Clare Wright about her memoir Speaking Up (2018).

Spending her early years in Britain before emigrating with her family to Australia, Triggs was raised with a keen sense of social justice. She spoke about the influence Greer's The Female Eunuch and de Beauvoir's Second Sex had on her as a young woman and how optimistic she was for a positive, equal future in which she could pursue whatever future she had imagined for herself. She shared how she ended up in law, how difficult it was in the late 1960s for women to get into the profession and how she developed her interest in international law.

Triggs then spoke about the fundamental freedoms at the heart of democracy - rights to be free from arbitrary detention, to a fair trial, to freedom of assembly, to be equal before the law, to vote, etc - and how Australia's rights have been eroded and are not protected by a Bill or Charter of Rights. She claims that 2001 was when Australia began to lose its way because of three distinct but linked incidents - the 'children overboard' claim, the Tampa crisis, and 9/11 - which lead to successive governments conflating Islam and asylum seekers with terrorism, and the creation of laws which have diminished the separation of powers and placed human rights at risk.

She spoke about her time as Human Rights Commission President, the intense scrutiny and abuse she endured, and how her resilience was fuelled by her team at the Commission, her anger at the injustice and the overwhelming community support. Triggs ended this empowering session with an optimistic view of the future and encouraged young people to be bold and stand up for what they believe is right. 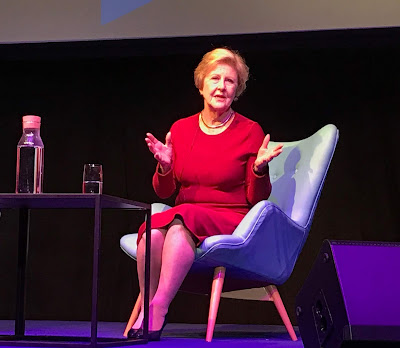 
One of my favourite events at each Sydney Writers' Festival is Insiders live which I attended with my festival friend (who secured some amazing seats!). With the host of ABC's Insiders program Barrie Cassidy set to leave the show mid-year, this event was particularly special and it started with a bang when James Jeffrey played the Insiders theme on bagpipes as he walked through Town Hall. 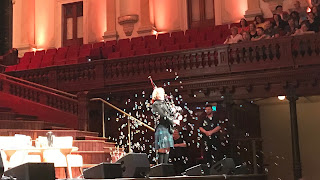 Cassidy was joined by journalists Annabel Crabb, Niki Savva, David Marr and Katharine Murphy, with Mike Bowers 'talking pictures' with Jack the Insider and James Jeffrey. Two weeks out from an election, with 16 candidates having had to pull out of the race for various unsavoury reasons, there was much to talk about.

Earlier in the evening there was a televised debate between the Prime Minister and Opposition Leader, which Annabel Crabb summarised. The panelists each spoke about the campaign highlights and lowlights. The general consensus was that Labor is performing well because they are a united team, with solid bench-strength, and they have clearly articulated policies to discuss. On the other hand, the Coalition is more of a one-man show with Morrison doing all the talking in this campaign and having no real policies to speak of. 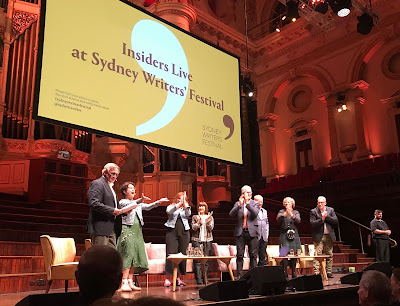 Talking pictures is always a hoot, with Bowers showing some of the best political cartoons of the campaign and some incredible photographic images. They also showed one of Huw Parkinson's gems - a mashup he did in September 2018 when Prime Minister Malcolm Turnbull was ousted. 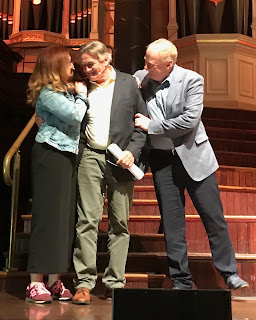 The 2000-strong audience all got to participate in the traditional 'Back to you, Barrie' twice this night, the final one including a thank you for Cassidy's 18 years at the helm of Insiders. The show will not be the same without him. The ever-humble Cassidy sought to escape the stage without much fanfare, but was forced to return for the prolonged standing ovation and there was a touching moment when he was hugged by Katharine Murphy and Mike Bowers at the end of the night. A great event with an amazingly gifted panel.

Looking forward to the next two days of the Sydney Writer's Festival!


I have written about my 2019 Sydney Writers' Festival experiences in three parts. You can access them at the following links: