I spent the weekend of 4-5 May 2019 at the Sydney Writers' Festival, attending nine sessions over the two days. Here's a run-down of the first day of my weekend at the Festival.

My first session of the day I chose because I was not really familiar with the panelists but I was intrigued by the premise of their discussion. Carla Gulfenbein, Toni Jordan and John Purcell spoke with Susanne Leal about their love of literature and how they have incorporated it into their works. 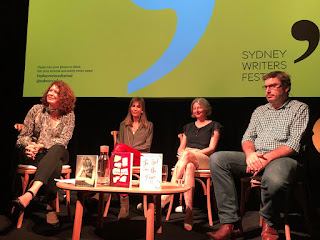 Carla Guelfenbein is a Chilean writer who has had a fascinating life, fleeing Pinochet and returning to her homeland 10 years later. She is a huge fan of Brazilian author Clarice Lispector. Guelfenbein's latest novel is In The Distance With You (2015) which features a character, Vera, based on Lispector. Guelfenbein spoke with great passion about belonging and the need for women to find their place in the world. She said that she is interested in people not fitting in where they are supposed to belong, and that is where she writes.

Toni Jordan is a Melbourne based writer. Her novel The Fragments (2018), centres on a dead author and a missing manuscript. In the book acclaimed author Inga Carlson died in a New York warehouse fire in the 1930s and her second novel was presumed to have been lost in the incident. Fifty years later fragments of this missing novel appear in Brisbane. Part mystery, part historical fiction, it is wholly a book about love of literature. Toni spoke about how good writers are also good readers and she reads two novels a week.

Purcell's novel The Girl on the Page (2018) has been on my reading list since it was published last year. It is about two literary giants who have been married fifty years, one of whom has received an advance for a novel that has yet to appear. A young editor is sent to assist the author make good on this advance. This novel is a behind-the-scenes look at the world of publishing, which is unsurprising given Purcell's long career as a bookseller and current role as Director of Books at Booktopia. Purcell spoke about his love of books and encouraged readers to stretch themselves by reading at a higher level that comfortable with.

When I tweeted the photo of the panel above, John Purcell tweeted back with a funny comment about his surly look, resulting in a bit of hilarity on my twitter feed that had me smiling all day.

I am always amazed by the political commentary and controversy surrounding the ABC. The independent public broadcaster is an essential in providing quality journalism and local content. The last year or so has been turbulent with the sacking of the Managing Director, Michelle Guthrie, and the replacement of the Board Chair with Ida Buttrose. 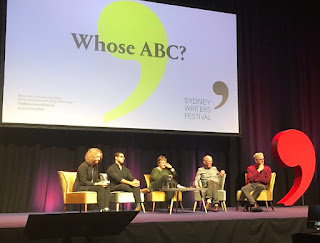 This fascinating panel was chaired by Sally Warhaft and featured Marc Fennell, Margaret Simons, Jonathan Holmes, and Mark Scott (former ABC Managing Director). The first subject was the appointment of the new Managing Director David Anderson, who was announced the day before this session. The panel spoke favourably of Mr Anderson and encouraged him to get out quickly and present his vision for the ABC. All agreed that Ida Buttrose is more than qualified to lead the Board, but there was a great deal of concern over the lack of transparency surrounding her appointment.

There was a lot of discussion about the important role the ABC has in telling Australian stories, particularly the voices that will not get covered on commercial television - indigenous, regional and remote. Mark Scott pointed out that it costs over $2M to make one hour of quality drama, and that is why so many stations look to making cheap reality TV. The risk is that the only Australian voices will be those of MasterChef and Married at First Sight contestants.

Funding continues to be a huge problem and the cost-cutting has had a terrible impact on morale of ABC staff. The politicising of the ABC has placed pressure on the network. The journalists spoke about the notion of 'fair and balanced' promoted by politicians, and said that balance is not what is needed. Rather fairness is prime, following the weight of evidence. They pointed out that on some topics there is a clarity of the weight of evidence (e.g. vaccination, climate change) and that 'balance' would undermine and mislead reporting.  All agreed that ABC needs to cover broader issues, like business topics (SBS has a series on managing small business) and consumer journalism.

As an ABC viewer I appreciated the insight each panelist brought to this session. Both Holmes and Scott have written essays for the Melbourne University Publishing 'On' Series in which writers are asked to produce a small book about a big topic. Scott has written 'On Us' about new media and Holmes 'On Aunty' about our national broadcaster in an era of media disruption.

Last year Kushner was shortlisted for the Booker prize for her third novel The Mars Room (2018) which tells the story of a woman who is incarcerated, leaving her young son to be cared for by his grandmother. I had not read this book and was not familiar with Kushner, when I selected this session. 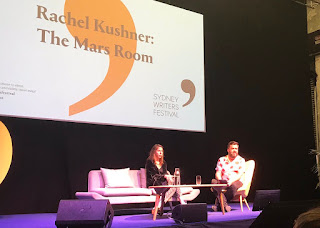 Kushner spoke with Michael Williams (Wheeler Centre) about the impetus for writing this book and her concerns about mass incarceration in the author's home state of California. She spent a lot of time talking wth inmates in order to understand the conditions in which they live and the circumstances which lead them to jail. She spoke about how she is unsettled by the lack of care for those who go to prison - the prolonged sentences, unavailability of books, the hopelessness of the parole system.

During the session, Kushner read a few passages from the book which were witty, heartbreaking and literary. It made me really interested in reading the novel.

My last session today was with Nigerian author Oyinkan Brathwaite who has crafted a dark, comedic novel about two sisters, one of whom has a habit of killing her lovers. 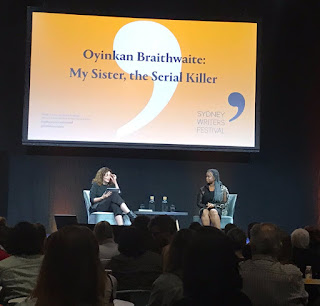 Braithwaite spoke to Rebecca Harkins-Cross about her literary influences - Jane Eyre, Great Expectations in particular, and the characters that interest her like Estella, Miss Haversham and Bertha, the first Mrs Rochester. She said she is drawn to strong female characters who do nefarious things.

The narrator in Braithwaite's novel is the sister of the killer, the enabler and supporter. She spoke about the need to write from this perspective, rather than trying to get inside the killer's mind. This gave her a freedom to write. Earlier drafts had the women as friends, but as the writing evolved they became sisters to make the ties familial and strong. 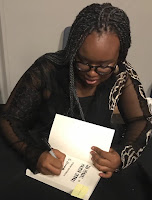 Beauty is a central theme as Ayoola, the murderer, is impossibly beautiful and is therefore able to get away with things that her plainer sister Korede, the narrator, is not. Braithwaite spoke about how quickly people are judged on their looks.

During the session Braithwaite read a number of sections, which were witty and compelling. My Sister, the Serial Killer has recently been shortlisted for the Women's Prize. I grabbed a copy at the Festival and was thrilled to have it signed by the author. I have been enjoying reading it in the past few days and will blog my review separately.


I have written about my 2019 Sydney Writers' Festival experiences in three parts. You can access them at the following links: