Bird on a Wire

When I first heard that there was a new Donna Tartt novel coming out I vowed not to go anywhere near it. I had been so disappointed by The Little Friend (2002), which I literally struggled to get through, that I couldn't bear the thought of tackling The Goldfinch (2013). But after being persuaded by a friend, I decided to give Ms Tartt another chance. 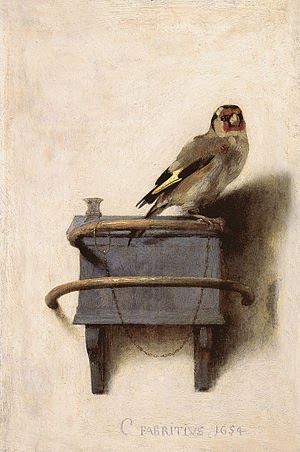 The Goldfinch is a modern bildungsroman, heist caper and cautionary tale rolled into one. It begins with young protagonist Theo Decker attending the Metropolitan Museum of Art with his mother. They are there to see one of her favourite paintings, the tiny oil painting of The Goldfinch (1654) by Dutch artist Carel Fabritus, when suddenly there is an explosion. The bomb kills many, including Theo's mother, and in the chaos and confusion that follows Theo is given a ring by a man lying in the rubble and is urged to retrieve the painting of the tiny bird to save it from the fire and debris.

The novel takes a Dickensian turn as traumatised Theo, orphaned in the city, is taken in by the parents of a school friend. He stays as a guest of his benefactors, the Barbours, slowly readjusting to his new circumstances. He seeks out antique restorer Hobie, the business partner of the owner of the ring, and forges as friendship with him and Pippa, a young girl who also survived the blast. All the while, he protects and keeps secret, the painting that his mother loved. 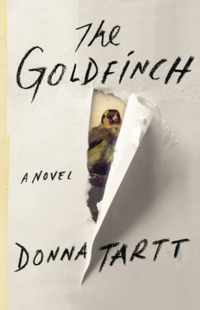 Just when Theo's life has stability there is a reversal of fortune. His absent father and new girlfriend Xandra arrive in New York to collect Theo and any assets he might have.  Uprooted to Las Vegas, Theo lives in a suburban wasteland, drinking and doing drugs with his new Russian friend Boris, a petty thief channelling the Artful Dodger to Theo's Oliver Twist / Harry Potter. Theo's father, a compulsive gambler and alcoholic, makes little effort at parenting. Tragedy strikes in Vegas too, and Theo finds himself back in New York, residing with Hobie and learning the antiques business.

The final segment of the novel takes the adult Theo to Amsterdam with Boris as an international search to recover the painting unfolds.

Having finished The Goldfinch, I come away conflicted. There were parts of the book I absolutely loved - Tartt has a gift for beautiful prose which gives the reader a clarity of time and place, the inclusion of references to art and pop culture were enjoyable.  But at the same time, she can be over descriptive to the point of annoyance (how much do we need to know about wood polish?).  There were other things about the book which drove me crazy too, like the long-drawn out descriptions of Theo's drug use and the stupid, unrealistic choices he made. Ultimately, I found myself not caring about the characters anymore and wanting the book to end. The only thing I cared about was the little bird on the wire...

The Goldfinch won the 2014 Pulitzer Prize for fiction and has divided critics. Vanity Fair published an interesting piece - It's Tartt-But Is It Art? - on the critical reaction to the novel. In some respects the sideshow surrounding the novel is more interesting than the book itself.

While frustratingly uneven, ultimately I enjoyed The Goldfinch and I am glad that I read it.
Posted by Ina Guddle at 07:22
Newer Post Older Post Home