Day two of FODI (Sunday 6 September 2015) was a great opportunity to attend a range of thought-provoking sessions.

Ford is a software developer and author of The Rise of the Robots: Technology and the Threat of a Jobless Future (2015).  His argument is that artificial intelligence, mass automation and rapidly advancing technology will see many jobs disappear. In terms of technophilia, he talked about the potentially unhealthy dependence many people have on their smartphones and other devices.

Lewis is an addiction specialist who has written The Biology of Desire: Why Addiction is Not a Disease (2015). As a neuroscientist he spoke about how technology can be healthy and cited examples of video games which can teach important life skills. While I purchased Ford's book and  look forward to reading it, I do not think I want to read Lewis' book on addiction. 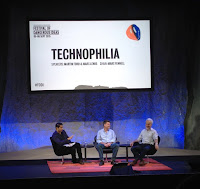 I had expected the panel to be a lively discussion, but instead it was rather boring. There was a brief moment when Lewis and Ford disagreed and it got interesting, but for the most part it was rather tame and certainly not dangerous. The presentation is not yet available on YouTube.

Knowledge Wars - Peter Doherty
Peter Doherty was an excellent choice for my next session. Winner of the Nobel Prize for medicine in 1996 for discovering the nature of the cellular immune defence, he is passionate about science. He despairs that in the popular press and on social media there is so much misinformation about important subjects like immunisation and climate change.

Doherty makes a passionate plea for ordinary citizens to become informed about science so as to make up their own minds about these important issues. During his talk he spoke about how education has become dumbed down so that our understanding of basic scientific concepts is limited.

He was quite funny in his talk, making digs at politicians, lawyers and judges for their lack of knowledge. His main concern at the moment is climate change and the misinformation being spread about it. Doerty's presentation is available to watch on YouTube.

His new book, The Knowledge Wars (2015), is a science book for non-scientists, encouraging us to look for the evidence in the information presented to us. I spoke to Doherty as he was signing my book and he was delightful.

My final session was the one I was most looking forward to today. British philosopher AC Grayling delivered a presentation on education that was inspiring, witty and thought-provoking. Education is a passion of mine so I was keen to hear what Grayling had to say.

His main argument centred on how we tend to think of education as a necessary tool for getting a job instead of education for broader life skills. Grayling argued that "education is for life and for living". He made a passionate plea for the Humanities to be taught alongside STEM subjects and highlighted how the study of history, literature, philosophy, languages and the arts make people better human beings as they better understand the human condition. His presentation is available on YouTube and well worth viewing.

Grayling was delightfully erudite, joking about how we should all be reading Plato in the bath. The hour passed so quickly and I could have listened to him forever. After the session I spoke to him as he signed a copy of his latest book The Challenge of Things - Thinking Through Troubled Times (2015). He told me a joke about lawyers as we talked about my work in education. He was very impressive and I look forward to reading his book.
So that was my Festival of Dangerous Ideas for 2015. The highlights for me were Naomi Klein and AC Grayling - both delivering powerful presentations. I also thoroughly enjoyed Peter Doherty, Peter Greste and Jon Ronson.

I have a lot of reading to do, having come home from the Festival with a stash of signed books, including:
Posted by Ina Guddle at 07:04
Newer Post Older Post Home