The Dignity of Mosses

As one of the few people on the planet that has not read Eat Pray Love (2006), Elizabeth Gilbert's bestselling memoir, I approached her novel The Signature of All Things (2013) without too much expectation.

I am not sure what lead me to pick up his book. Gilbert was in Australia earlier this year at the All About Women festival I attended, although I did not attend her sessions. But then I saw her on ABC's The Book Club and Marieke Hardy praised her Signature so I thought I would give it a chance. 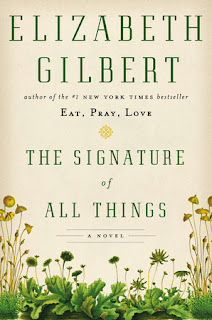 Set primarily in Philadelphia, the story begins in 1800 with the birth of Alma Whittaker the long-awaited child of wealthy botanical import/exporter Henry and his Dutch wife Beatrix. Alma is a fiercely intelligent child, with her intellect making up for her lack of beauty. She naturally becomes fascinated with botany and can converse with authority on plants of all types. As she ages she becomes fascinated by mosses and spends her life work studying them.

Alma's pursuit of mosses is only matched by her pursuit of love and belonging. She falls in love with an unobtainable man, and then marries another equally unattainable. Then, in later life, realising she has only ever really known the White Acre estate on which she has resided, Alma sets out on an extraordinary journey to Tahiti and Amsterdam in which she makes a monumental discovery.

Gilbert's writing is beautiful - describing orchids and mosses with such detail - and she transports the reader back in time convincingly.  She covers the abolitionist movement, pharmaceutical discoveries, the voyages of Captain Cook, and the discoveries of Darwin. Alma is a wonderful character, vividly depicted, and I enjoyed travelling with this witty, intellectual, woman of science.

Signature is a big, ambitious book and the result was somewhat uneven for me. There were parts I enjoyed thoroughly and became engrossed in, particularly the first half of the book describing Henry Whitaker's upbringing and his work for Sir Joseph banks in Kew Gardens. But in other parts, like the trip to Tahiti, I felt the story dragged and lost momentum. Overall though I would recommend this book, particularly to those with an interest in natural history and a love of plants. This would make a great book club read as there is so much to discuss.