The winner of the Man Booker Prize was announced yesterday. In the lead up to the announcement there was a lot of hype that the prize would go to the bookies' favourite, Canadian author Madeleine Thien for her book Do Not Say We Have Nothing. The other front runner was Graeme Macrae Burnet for His Bloody Project, which has seen a dramatic increase in book sales since the shortlist was announced. 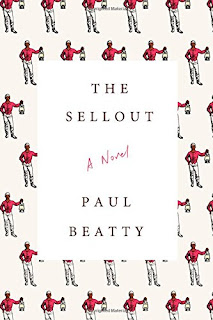 Ultimately the prize would go to Paul Beatty for his novel The Sellout. This is the first time an American author has won the Booker prize.

The Sellout is a satirical novel about a young black man who ends up in the Supreme Court having to defend himself for having reinstated slavery and segregation in his hometown of Dickens, California.

As a commentary on race relations in America, it seems like a clever choice for the Booker this year. From what I hear it is an outrageously funny book, and I look forward to reading this novel when I whittle down my to be read pile.

While I am saddened that His Bloody Project did not win, I am pleased that the Booker has increased the profile of this brilliant little novel.
Posted by Ina Guddle at 07:32
Newer Post Older Post Home